Second report: Our compact load-lugger is wearing well under the constant pressure of a pair of mucky pups 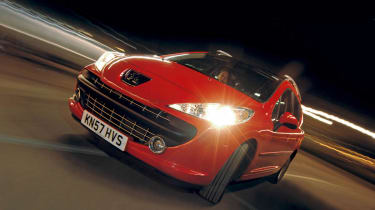 There’s been a biohazard in the Auto Express long-term fleet – and it’s time to get rid of it!

With the help of two little Gremlins, my sons Harry and George, our Peugeot 207 SW gets into a sticky mess on a weekly basis. But if the design is as clever as the firm says, getting it spotless again should be a breeze. So how does the Peugeot 207 SW fare in my ‘easy to clean’ challenge? On the surface, pretty well. The interior regularly gets the works thrown at it, from blackcurrant juice and crisps to cake and even cunningly concealed apple cores. Basically, we are talking a blindfolded chimps’ tea party – and on longer journeys there’s a sit-down buffet to follow.

Despite the carnage, the trim usually comes up fine. Most of the interior fabric washes out after a gentle scrub with some upholstery cleaner. Even the cream-coloured roof lining reverts to its original shade. However, the mesh-style fabric on the centre of the rear seats is a different matter, as it attracts all the little crumbs. That’s not a problem if it’s dry and you’ve got the vacuum cleaner to hand, but if someone has spilt liquid over them, the bits are really stubborn to shift.

On the upside, the backs of the front seats can be returned to great condition in no time. Anyone with young kids will know this is the usual trouble spot, as it’s where children rest their mud-soaked weary feet after a long day out.

Vacuuming the mats and under the seats is reasonably straightforward, but the space between the centre console and front seats is so tight that it’s tricky to insert even the narrowest vacuum attachment. But we’re not complaining much, because the driving position is great.

Another area where Peugeot has got its family-friendly design right is the luggage space. The boot runners do a great job of keeping messy boxes, garden rubbish and general bits and bobs off the carpet. The chrome plate on the boot lip helps when lifting heavier items into the car, too. It acts like a front doorstep, removing all the muck as you slide a box or sack across it on to the rails, and then into the car. A quick wipe over and it’s shiny again!

The glass roof is less fun to clean. Despite all the arm ache, I really like the standard-fit panoramic top. When I’m driving alone I always have the interior cover retracted, but the option to seal out the sun is essential. The kids get cooked in the summer months, and ask me to close it whenever we set off.

Another novelty that has worn thin is the front and rear seatbelt sensor. Although I have previously championed the security of knowing both the young ones were buckled up, just lately the sensor has started bleeping while I’m the only one in the car. Sometimes it stops, other times it gets louder and louder until I have to pull over and plug in all the belts for the sake of my sanity. It’s a recent technical glitch, so watch this space for developments.

One other problem was down to driver error, but the Peugeot seems to have got us out of a scrape! While driving down a narrow road at school pick-up time, we caught a parked car. The horrible sound of metal against metal sounded expensive, but the door rubbing strips on the passenger side had taken the impact, protecting both doors and the rear wheelarch from damage. So despite leaving our details on the other car, at least the quote for the Peugeot is likely to be less than the insurance excess!

Second opinion WHEN I jumped into Darren’s 207 SW the other weekend, I expected to find evidence of its tough family car use. Thankfully, he’d just carried out his big clean, and the Peugeot was like new.

I was also pleased not to be carrying any passengers in the back – so I could enjoy the sunshine with no complaints! I reckon the SW is a capable small estate, too. A friend of mine has an old Skoda Fabia load-lugger, and the Peugeot is much better looking.