The new Peugeot 508 Hybrid promises low running costs, but does that make it the pick of the range?

Company car users looking for a handsome, smart-driving car - that isn’t an SUV - could do extremely well by choosing the Peugeot 508 Hybrid. The latest Benefit In Kind tax rules mean that this will be by far the cheapest 508 in the range to run, and specifically, to tax. Anyone with easy access to charging will be able to benefit from potentially tiny running costs, too. For private buyers, however, this top spec GT trim does look pricey.

With strict emissions regulations coming into force in 2020, cars like the Peugeot 508 Hybrid are soon going to become much more common. And it’s as much for the manufacturers’ benefit as the buyers - any car brands that fail to hit the CO2 targets will be subject to some eye-watering fines.

And Peugeot has certainly managed to nail the low emissions brief with the 508. Officially, it emits just 29g/km of CO2, or just a gramme more if you go for the estate-bodied SW version. It’s cars like this, plus the all-electric e-208 and e-2008, that explain why Peugeot, unlike some other brands, says it has no worries whatsoever meeting the latest emissions rules.

But before we go into the details of how those emissions levels are possible, let's recap on the 508 itself. The Skoda Superb rival does things a little bit differently from others in the class - prioritising style while most competitors maximise space and practicality. At least the addition of all the hybrid gubbins hasn’t affected how much space there is: the boot still offers up 487 litres of volume. 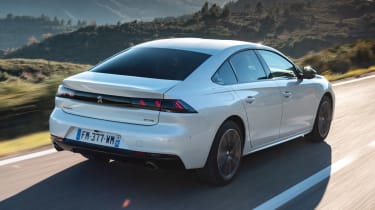 It’s fun to drive, too, and this hybrid version doesn’t feel drastically different from the rest of the range. Grip is decent, it stays flat through the corners, and once up to speed it feels stress-free at a cruise.

Inside and out, there's not much to separate the Hybrid from the conventional petrol and diesel. The body has a couple of subtle Hybrid badges stuck to the front wings, and there’s an extra flap on the nearside three quarter panel which covers the charging port. Step inside, and the dashboard still has the wow factor of a concept car, only now there are some revised graphics for the digital dials to show the energy use of both the battery and combustion parts of the powertrain. The infotainment system - still irritating to use, not least because the heating functions are controlled for the most part by the touchscreen - gets a couple of extra menus.

Press the piano key switch with a little lightning motif on it to access the first of the new menus: a page which displays some hybrid-specific functions. These include a real-time graphic of the hybrid system’s energy flow - how the power mix varies between electric and petrol during driving - and also a setting which allows you to hold charge in the battery for any low emissions zones later in a journey.

It’s a mode that you’ll be able to cover roughly 33 miles in, at speeds up to 84mph. Prod the starter button, and the 508 silently moves away, and the 108bhp motor is perfectly adequate for keeping up with most urban traffic.

Should you need a little extra shove, the 1.6-litre turbocharged petrol engine chimes in. This makes an extra 178bhp on its own, but with both petrol and electrical pieces of the hybrid puzzle giving their best at different times, the total is 222bhp. That’s the same power output as the most powerful petrol 508, but with this car burdened with carrying a couple of hundred kilos of battery pack, outright performance is blunted slightly.

The 508’s hybrid setup isn’t quite as slick as those of some rivals. Ask for more power in electric mode, and it takes a little while for the petrol engine to wake up and then make its own contribution. Of course, you can nudge the drive select switch into Sport, keeping the petrol engine ready at all times, but this, of course, uses more fuel.

And fuel saving is what the 508 Hybrid has the potential to do exceptionally well. Officially, it manages 217mpg, but that’s completely dependant on the sort of journeys you do, and how good you are at keeping the battery topped up. If you have a readily available charging point, say at home or at a workplace, and have a modest commute, it’s possible that you may barely ever need the petrol engine at all. However, those covering plenty of longer journeys will find fuel costs to be much higher. 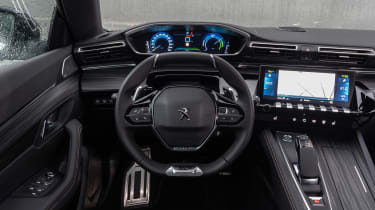 The 508 hybrid isn’t available in the most basic Active trim level, but it’s offered in the other three. The Allure has all the equipment you’d really need: 17-inch alloy wheels, Apple CarPlay and Android Auto, built-in navigation, a reversing camera and a safety pack featuring blind spot detection, advanced driver attention alert, and road sign recognition are all standard.

Prices for the 508 Hybrid start from £34,875 in Allure trim and climb to £40,630 for the GT. That’s a lot of money for a private buyer to stomach, and given that petrol or diesel versions cost several thousand pounds less, you’d need to cover serious mileages, (or live in a low-emission zone) before you start to recoup the cost.

However, for company car users, it makes a whole heap of sense, because new Benefit-in-Kind tax bands very much favour fully-electric and plug-in hybrid vehicles. It means that, for a 508 Hybrid in Allure trim, users in the 40 per cent tax bracket will be paying £1,395 per year. By contrast, even the least polluting diesel - the 1.5 BlueHDi which makes the best part of 100bhp less, will cost £2,415.