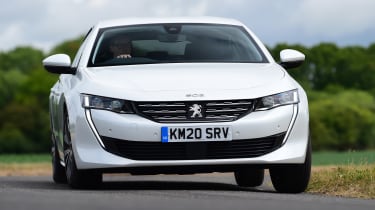 The Peugeot 508 plug-in is pricey, but low running costs should help offset this. Its dynamics are fine, if not fun, while the level of kit in Allure trim is great. However, while there’s lots of tech, some of it could be better thought out and executed. There are just a few issues at this price that don’t quite match Peugeot’s premium aspirations, but it’s still a sound PHEV package on the whole.

Peugeot launched its 508 with premium aspirations, but to compete on that level in 2020 means you need a plug-in version. Which is why the brand has added this Hybrid 225 PHEV to the line-up.

Big premium cars like this are often favourites with company car buyers, and with Benefit-in-Kind tax regulations benefiting PHEVs significantly in the 2020/21 tax year, the plug-in Peugeot has arrived in the UK just in time.

The combination of 1.6-litre turbo petrol engine and electric motor cuts CO2 emissions to just 29g/km and promises an all-electric range of up to 39 miles. This means the £34,945 Allure model will only cost £1,364 per year in company car tax for higher-rate earners. Compare that to a similarly specced, less powerful and cheaper petrol 508, which will cost the same driver £3,996 a year, and the plug-in certainly has a positive impact when it comes to running costs.

Peugeot claims official economy between 166.2mpg and 235.4mpg, and while these figures are meant to be realistic, as with any PHEV, take them with a pinch of salt. If your daily mileage is less than that maximum EV range and you plug in every night, then you might not have to fill up for months. If you cover more miles and exhaust the battery’s supply of energy, then fuel economy will take a hit. However, even with an empty battery, we still saw more than 50mpg on the trip during our time with the car.

The 11.8kWh battery takes an hour and 45 minutes to charge using a 7kW home wallbox. However, the 7kW on-board charging option is £300; otherwise the 508 will downgrade the feed coming in to 3.7kW.

The battery supplies a 108bhp electric motor, and combined output with the 1.6 turbo petrol engine is 222bhp. Performance is swift enough, with 0-62mph taking 8.3 seconds, but it’s under short bursts of acceleration at lower speeds where the hybrid set-up is at its best. That’s because the electric motor gives instant performance in a smooth wave, filling in for any holes in the combustion engine’s power delivery. However, it’s doubly impressive here because it also mitigates some of the problems with the eight-speed automatic gearbox.

The EAT8 unit’s shifts aren’t the smoothest, but the electric motor’s extra torque helps carry the car along between changes, so the pauses between shifts are less obvious.

However, at times it still feels like the two power sources could be better integrated. We did find that when the battery was exhausted and the petrol engine kicked in, the 508 tended to surge forward, accelerating a little even on a constant throttle.

A soft ride means the 508 PHEV is one of the better models we’ve tried on PSA’s EMP2 platform. Only occasionally does it bounce about, and while there’s some roll, it’s mostly composed, relatively grippy, given it’s carrying an extra 300kg over a similar pure petrol model, and compliant. 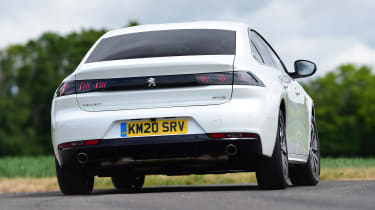 One strong point of the PHEV is that its 487-litre boot is unchanged over the regular car. Head and legroom aren’t that generous, but quality is good enough, while the low seating position and high dash and centre console mean the 508 has the most convincing execution of Peugeot’s i-Cockpit set-up yet, even if it won’t suit every driver.

You get lots of features, but the age-old problems of the 10-inch touchscreen stand; it should be more responsive. The piano-key shortcut buttons underneath it do make moving from menu to menu easier, though.

There’s an energy button that shows usage and flow, while you can also select driving modes – there are settings to charge the battery using the engine when EV range reaches a certain point. It’s good if you want to build up reserves for use in town, but it does work the engine harder.