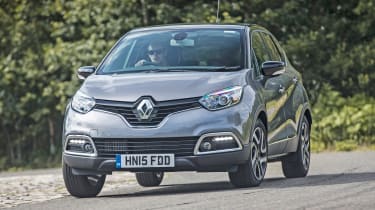 Renault is facing new questions over emissions cheating after a French newspaper report claimed its cars were equipped with software that allowed them to cheat through laboratory-based emissions tests.

The French carmaker has been under investigation from French prosecutors over possible emissions tampering, and now the newspaper Liberation has said it obtained a document from the investigation which indicates two Renault models, the Captur and Mk4 Clio, pollute 300 per cent higher under real world conditions.

Renault has denied any emissions cheating. In a statement, the company said: "Groupe Renault has acknowledged the publication of an unbalanced national newspaper article related to the "emission" case. This article alleges to quote selected excerpts from a report drafted by the DGCCRF.

"Groupe Renault will not comment on a current investigation, the latter being confidential by nature and Renault having as yet no access to the case. As a consequence, Renault cannot confirm the veracity, completeness and reliability of the information published in said article.

"Renault will prove its compliance with the regulations and reserves its explanations for the Judges in charge of investigating this case. Groupe Renault reminds that none of its services has breached European or national regulations related to vehicle homologations. Renault vehicles are not equipped with cheating software affecting anti-pollution systems."

Renault under investigation from French prosecutors

The anti-fraud agency passed the case on to French public prosecutors last year, who have since passed it on to prosecutors in Paris with interregional jurisdiction over consumer affairs. Whether the investigation leads to a trial will be decided by the judges currently investigating the case. Renault's share price has tumbled sharply since the reports first came out.

The investigation is the latest emissions-based issue to hit the French carmaker. Last year Renault was forced to recall 15,000 of its vehicles fitted with the dCi 100 engine due to an error in the device that controls emissions. The recall included 270 cars in the UK, but none had yet been sold to owners.

Renault has said it acknowledges the investigation is being conducted by the French prosecutors but maintains that it complies with all emissions regulations.

Renault has also stated it is working on a new plan to cut its vehicle emissions, in response to the investigation by the French government that found some of its vehicles polluted above accepted limits in certain conditions.

In the wake of the VW emissions scandal, the French Government set about retesting 100 different cars - 25 of which are Renaults, reflecting the company's market share in the country. Although the French energy minister Segolene Royal previously confirmed the tests found no defeat device emissions cheating software, she did reveal that CO2 and NOx emissions from Renault and other manufacturers were above the accepted limits.

At the time, PSA, the parent company of Peugeot, Citroen and DS issued a statement denying that the tests revealed any anomalies with its vehicles. After the announcement by the DGCCRF, Renault’s share price fell by 4.6 per cent, before slowly climbing back up.

The French carmaker had its offices raided in January 2016 by the French anti-fraud officials. Renault later confirmed that certain items like employees' laptops were seized by the authorities.

Renault also said it is fully cooperating with the authorities in their investigation, and that the tests have not revealed anything in terms of a defeat device being present in the French manufacturer's cars.

Real world emissions from cars have come under greater scrutiny following the diesel emissions scandal that has engulfed the VW Group. When Auto Express spoke to Renault UK after the VW scandal story broke in September 2015, the company categorically denied emissions foul play and it has reiterated that it does not use emissions cheating devices in its latest statement.

Read the full story on the VW emissions scandal here...