The second-generation Renault Captur is on sale now priced from £17,595. It’s tasked with re-affirming the brand’s position in the compact-crossover class, facing up against rivals such as the Nissan Juke and Skoda Karoq. 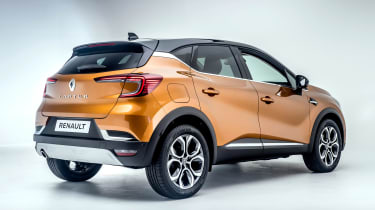 The second-generation Captur is also available with a new plug-in hybrid powertrain, which has been developed using knowledge gained from the Renault F1 team. The system comprises a naturally aspirated 1.6-litre four-cylinder petrol engine, an integrated starter-generator, a conventional electric motor and a 9.8kWh battery.

The system develops 158bhp and 340Nm of torque and has a maximum all-electric range of 30 miles.The system also features a “Sport” mode, which forces the electric motors and the petrol engine to work in tandem when the throttle is fully depressed.

Renault’s new plug-in hybrid system is fitted with an energy recovery system and a function which forces the vehicle to start in pure-electric mode. The French brand also says the Captur E-Tech Plug-in is capable of delivering economy figures of 188mpg and CO2 emissions of 34g/km. However, due to the intrusion of the batteries, boot capacity has dropped from 526 litres to 379 litres. 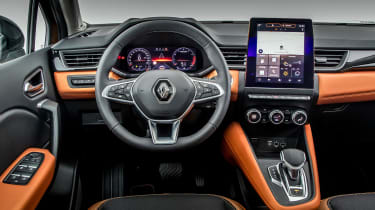 It sits at the top of the Captur line, priced from £30,495, and features a unique infotainment system comprising a 10-inch digital gauge cluster and a 9.3-inch dash-mounted touchscreen. Both screens feature a range of unique displays which allow the driver to monitor recharge times, energy recovery rates and the current charge level of the car’s battery pack. Every plug-in Captur also comes with a free 7kW wallbox charger, too.

The rest of the Captur range is made up of three petrol and two diesel engines. Entry-level cars are fitted with a 1.0-litre three-cylinder TCe petrol engine and a five-speed manual gearbox. The engine produces a maximum output of 99bhp and 160Nm of torque and gives the Captur and claimed fuel economy figure of 47.1mpg.

Above that site a 1.3-litre four-cylinder petrol engine with either 129bhp and 240Nm of torque or 153bhp and 270Nm of torque. Both versions are offered with a seven-speed dual-clutch auto gearbox, offering a claimed economy figure of 44.8mpg for either unit. A six-speed manual is available on the lower-powered model, which decreases economy to 44.1mpg.

The diesel range is built on Renault’s turbocharged 1.5-litre four-cylinder Blue dCi engine. It’s offered in two outputs – the entry-level model has 95bhp and 240Nm of torque, while the range-topping unit has 115bhp and 260Nm of torque. Both come with a six-speed manual as standard, although the more powerful model can be speed with a seven-speed automatic. 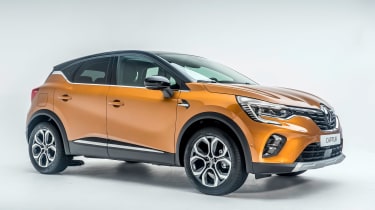 Cosmetic updates are easy to pick out – the Captur now sports LED headlamps, like those fitted to the latest Clio, and they’re standard across the range. The whole car is 110mm longer, 20mm wider and marginally taller than before, which has helped the Captur morph into a properly sized crossover with a generously sized boot.

Boot capacity has improved by 81 litres to 536 litres, and the size increase should offer improved rear-seat head- and leg-room. The Captur’s rear end also sports a new set of C-shaped LED tail-lamps, while 11 exterior colours and four contrasting roof finishes mean there are 90 different configurations for buyers to choose from.

To make the size increase possible, Renault has moved the Captur onto its latest CMF-B platform. It’s the same basic architecture that underpins the latest Clio, which is lighter and stiffer than the outgoing Captur’s underpinnings. As such, it should bring improvements to the crossover’s refinement and handling.

Do you like the look of the new Renault Captur? Let us know in the comments section…

There's a huge range of crossovers and small SUVs on the market today. These are our top ten picks
New Renault Captur 2020 review 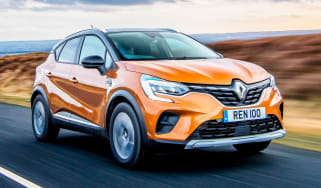