Special edition Renault Clio R.S. 18 coming to the UK after all, with French marque confirming 15 units for Britain 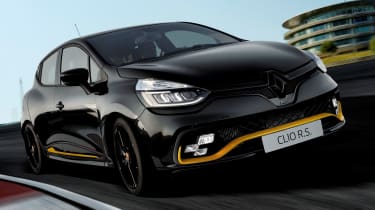 Renault has announced its limited edition Clio R.S.18 will cost from £24,295 in the UK, with only 15 examples of the hot hatch available to customers.

Based on the RS 220 Trophy, it’s marked out by a deep black colour scheme and liquid yellow flecks, which is a nod to this year’s Renault Formula 1 racer. The R.S. logo and rear diffuser are all finished in black, with yellow detailing on the front blade and wheels.

Inside, the cabin is trimmed in Alcantara and leather, while numbered kick plates and R.S. branding can be found on the doorsills and steering wheel. 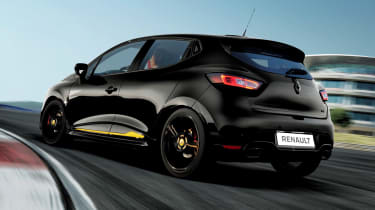 It’s powered by a 220bhp 1.6-litre engine, which is carried over from the Trophy model and twinned with a six-speed dual-clutch automatic gearbox. Renault says it’s capable of 0-62mph in 6.6 seconds and will hit a top speed of 146mph.

Larger brake discs have been carried over from the standard Clio RS, but braking performance has been improved by five per cent. Launch Control, Hydraulic Compression Control and ‘rally-bred’ damper technology also feature along with an Akrapovic sports exhaust system.

The R.S. 18 will be available through a network of Renault Sport Specialist dealerships, and first deliveries are expected in mid-June.