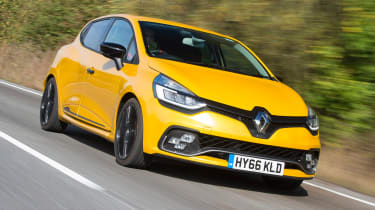 Small tweaks inside and out the Renaultsport Clio improve an already well-rounded product, but can’t hide the fact that Renault’s supermini hot hatch still lacks that last degree of involvement. A manual gearbox remains notable by its absence, which is a shame because the RS is an otherwise hugely enjoyable package. It handles sweetly, looks great, rides well and sounds fantastic. The problem is that die-hard fans will find more enjoyment in one of the Clio’s manual rivals.

Renault will finally complete its total range revamp when the new Scenic goes on sale in the UK later this year. Every model, from the Captur to Kadjar, now has a recognisable family face with the prominent diamond logo and bold front-end styling – as well as cutting edge technology inside and out.

The overhaul started four years ago with the popular Clio supermini – a model that made its name back in 1991 by superseding the iconic Renault 5. It was the first car to utilise Laurens van den Acker’s new design language, and proved an instant hit across the globe.

• Best hot hatchbacks on the market

Determined not to rest on its laurels, Renault has injected the fourth-generation Clio with a series of mid-life updates for 2016. Yet while the humble petrol and diesel models will take the lion’s share of sales, Renault’s history of iconic hot hatches means a fresh RS is always an exciting test. This is our very first taste of the facelifted Clio on UK roads. 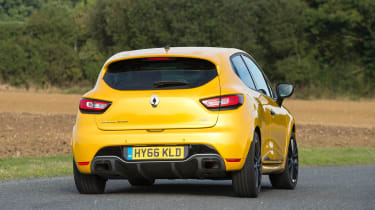 This Trophy model sits above the standard Clio Renaultsport and is now a permanent fixture in the Clio range. It commands a sizeable £2,700 premium over the normal car, but adds an extra 20bhp – as well as bigger 18-inch wheels and lowered suspension. The throaty Akrapovic exhaust on our car is an expensive (but worthwhile) £900 option.

The changes also bring revised front and rear lights, as well as new bumpers and the eye-catching three-piece LED fog lamps from Renault’s R.S. 16 concept. It certainly ensures this new model stands out – only helped by the £1,300 Liquid Yellow paint on our test car.

Inside, you’ll find a host of updated high-quality materials and a logically laid out dash. The Trophy gets the easy-to-use R-Link Multimedia system too, with a seven-inch screen and TomTom sat-nav. It’s nicely built, but the leather trim in our pictures is another expensive (£1,250) option. If you want them heated, that’ll be a further £250. 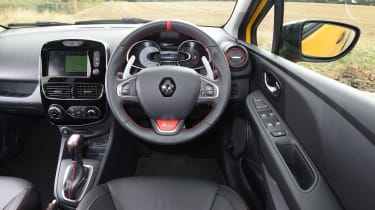 Of course, none of these aesthetic upgrades affects the way the car drives. The steering is as precise as ever and offers decent feedback, and while there isn’t quite as much grip as in a Ford Fiesta ST, turn-in is excellent and there’s enough composure to lean on the car through tighter bends. The Trophy’s stiffer shock absorbers and rear springs – along with the shorter ratio steering rack – make it remarkably playful on the right road. The brakes are strong, too.

But don’t think the aforementioned lowered suspension means a back-breaking ride. It is firm, but the new Clio Trophy doesn’t crash over rougher surfaces. It manages to soften harsh expansion joints without compromising agility – making it pleasantly refined for a hot hatch, with little in the way or wind or road noise.

There’s no annoying drone from that excellent Akrapovic sports exhaust, either. Unlike the Fiesta, which tends to hum noisily at motorway speeds, the RS just goes about its business quietly and confidently. Floor the throttle and the exhaust instantly awakens though, with pleasing parps on full-bore upshifts. It adds another dimension to the hot hatch, and will have you reaching for the RS button on each and every journey.

Having said all that, the outgoing model gained extensive criticism for its automatic-only transmission, and die-hard fans will be disappointed to hear this facelift doesn’t rectify the issue. Renault teased us with a six-speed manual in the R.S. 16 concept earlier this year, but still refuses to fit it on the car people can actually buy. 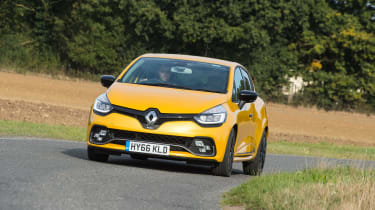 As dual-clutch gearboxes go, it’s up there with the best, but it robs the Clio of that last degree of involvement. It’s a perfectly plausible solution in stop-start traffic, but break free from the city streets and you’re left longing for a short-throw gaited gear-lever.

The revised Renault Clio Renaultsport continues to hold onto its gears a little too long, and while that’s easily remedied by taking control via the long, tactile, aluminium paddles in manual mode, it’ll still change up of its own accord as you hit the redline. Changes are smooth, though, and they each happen in the blink of an eye.

It’s not as rewarding as the six-speed manual in a Volkswagen Polo GTi, then, but it doesn’t affect performance. The Clio RS Trophy will do 0-62mph in just 6.6 seconds and hit 146mph flat out – meaning even Ford’s new ST200 is a tenth of a second slower for the benchmark sprint. The dual-clutch set-up also helps with claimed fuel economy, which, despite the impressive performance, stands at 47.9mpg. Emissions of 135g/km put it in the same annual tax band, however.