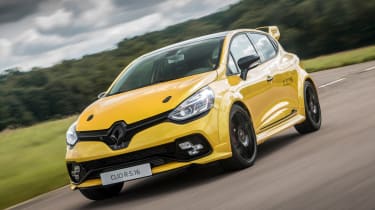 Despite the fact that this is a concept car, the team at Renaultsport has got all of the fundamentals spot-on with the R.S. 16. It’s incredibly capable on a race circuit, with an involving and playful driving experience. There’s no doubt this car would be a superb track day toy, and hopefully it will be available with a set of reg plates. We just wish Renaultsport would tell us if the car is going to be built. It’s fantastic; why not just get on with it?

We've been waiting for this moment for months: the chance to finally drive the Renaultsport Clio R.S. 16 concept, after following its development almost from the start. The formula of this car could hardly be simpler, as it puts the more potent engine and slicker gearbox from the Mégane RS into the smaller, lighter Clio.

If the upgrades beneath the surface weren’t enough to get you hot under the collar, then the styling of the R.S. 16 certainly will. It looks as if it’s about to burst with the performance that’s on offer. New suspension, a bigger exhaust system and brakes, plus that huge rear wing all add to that; you can’t help but love the way this thing looks, putting Renault’s F1 team’s gold livery aside.

It’s reminiscent of the old Clio V6, and while that car was mid-engined and rear-wheel drive, its crazy spirit lives on in this one. In fact, part of the project was to create the fastest Renaultsport model ever – and our session at France’s Circuit des Ecuyers suggests that Renault has managed it.

Even getting into the R.S. 16 feels special, thanks to the two-seater layout that features racing seats and harnesses. The driving position is low and close to the wheel, which is perfect for driving on track. 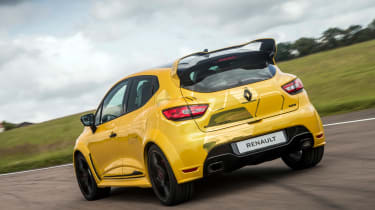 Setting off, the engine emits a muted growl through the new Akrapovic exhaust, but it’s the manual gearbox that we’re most pleased about. The current Clio RS has a rather disappointing dual-clutch transmission, but for the R.S. 16, Renault has gone back to basics with a manual.

It’s a bit notchy, but that’s the case in the Mégane as well. The extra involvement you get from changing gear yourself is a treat, though, and what a hot hatch should be about. The Mégane’s engine had always been a distinctive unit, sounding more like a jet engine than a four-cylinder turbo, which is even more true in the R.S. 16. It sounds like it’s about to take off, racing through the rev range.

The extra performance is immediately noticeable. It feels significantly faster than the Mégane in a straight line, then darting between corners with real agility. 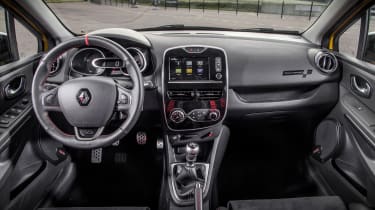 There’s no extra weight over the standard Clio RS, so the power-to-weight ratio is much better, at 221bhp per tonne compared with 164bhp. As it’s no heavier, the R.S. 16 still dives into corners enthusiastically. The sophisticated suspension – part of it taken from the Clio R3T rally car – means there’s virtually no body roll, either. The car’s wider track, rear wing and track-focused tyres mean you’re certainly not short on grip, so you can power out of turns with that thumping 271bhp motor. The steering isn’t as pin-sharp as the Renaultsport Mégane’s, but we’re assured that if the car went into production, this would be something given extra attention by the engineers.

Inside, it’s all standard Clio RS switchgear, although the seats and harnesses are from the Mégane Trophy-R. There’s a huge boot, but the lack of rear seats does dent its practical credentials – not that it really matters here. We’re informed, though, that if this concept makes it to showrooms, the production model could be a four-seater.

Whether or not the Clio R.S. 16 gets the nod for showrooms is the question, however. Renaultsport boss Patrice Ratti told us that this still hasn’t been decided, let alone how much it will cost. Pleasingly, you do get the sense that he’s fighting hard for it to make a small production run. 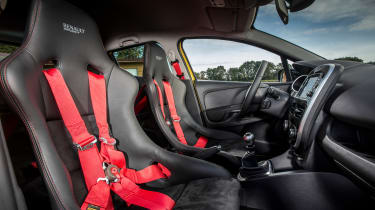 Some prototypes for durability testing are likely to be built later this year, he told us – but the final decision is one of economics.

The car can be built at a rate of about two per day at the brand’s Dieppe factory, but Renault will need to gauge the business case for diverting those resources.

The R.S. 16 has all the ingredients to become an all-time Renaultsport great, along with legends like the Clio V6 and Mégane R26R. We’d hate to see it fall into obscurity.