Renault Megane Renaultsport 275 Cup-S mega-hatch is hotter than hot, yet scorches many rivals for price 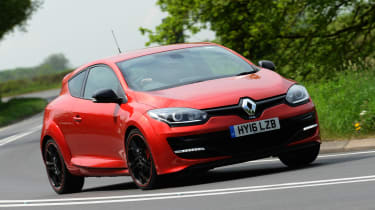 It may be based on the previous-generation Megane hatchback, but the RS 275 Cup-S serves as a reminder of just how good this car is to drive – and at a reasonable price (if you are careful with the expensive optional extras). It’s more fun than hot hatches that cost £5,000 more to buy, and it still looks the part, too. But hot hatches have evolved, and cars such as the Golf GTI prove you don’t have to sacrifice comfort and practicality in the quest for ultimate thrills. The dated interior is a drawback, too.

So far, 2016 has been the year of the mega-hatch, with the Ford Focus RS, Honda Civic Type R and Audi RS3 all battling for class honours with their incredible performance and ability. So, it would be understandable to forget about the Renaultsport Megane – after all, this model has been around for six years. If you’re in the market for a hot hatch, however, don’t make that mistake.

Renault’s latest version of the hot Megane is this: the 275 Cup-S. In standard specification, it’s an absolute bargain compared with the £30,000-plus hot hatches mentioned above. Starting from £23,935, the Cup-S gets the most powerful version of Renaultsport’s 2.0-litre engine, producing 271bhp, as well as the Cup chassis as standard. This stiffens the car and adds a limited-slip differential to improve handling and grip. 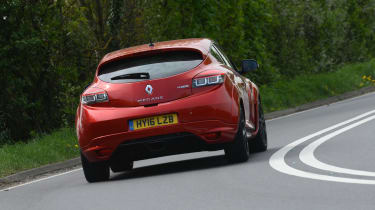 Despite having been around for so long, don’t underestimate just how good the Megane RS is to drive. The steering is sharp, precise and perfectly weighted, and the nose is eager to dive into corners. The stiff suspension eliminates body roll, while the limited-slip diff means you can get on the throttle mid-corner and feel the car drag itself around. This Renault is playful, too, with a beautifully balanced chassis that’s happy to allow a bit of slip if you apply correct throttle loads at the right time in corners.

The 360Nm engine is torquey enough to feel powerful in the mid-range, but still more than happy to rev, especially in Sport mode. This setting sharpens the throttle response and gives you the full 271bhp to enjoy. The six-speed manual’s short ratios mean you can enjoy the process on the road, too, and the aggressive clutch bite gives a real sense of urgency as you rifle through the gears.

Performance is excellent as well, and while the Megane isn’t quite as quick as its more expensive rivals, the lightweight body and relatively high power output mean there’s not much that can touch it at this price point. The 5.8-second 0-62mph time is impressive enough, but what’s really spectacular is the way the RS rockets down a B-road; it’s still one of the finest-handling front-wheel-drive cars out there. 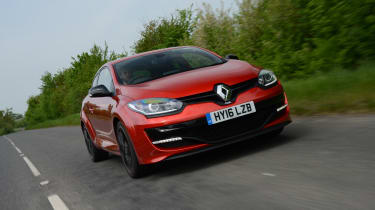 We’d argue that it’s one of the best-looking as well – even though the RS is based on the previous-generation Megane coupe body. The optional Flame Red paint and black alloy wheels on our test car look fantastic, but specify both and you’ll have to stump up an extra £1,625.

In fact, the car you see in our pictures will set you back £32,555 as driven, which puts it up against the Focus RS in terms of cost. So, while the dirt-cheap sticker price will draw buyers, in reality, not many examples will leave the showroom for that tag.

To get the Megane RS at its best, the options you really need are the Recaro seats (£1,300) and manually adjustable dampers (£2,000). The exhaust isn’t essential, and it’s expensive, too, at £2,500. The seats and dampers bring the price to over £27,000 – so the Renault isn’t quite the performance bargain it’s made out to be. 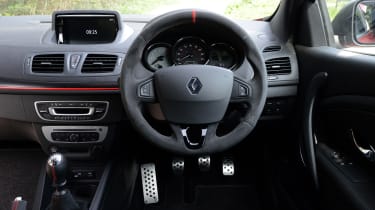 Something else you’ll have to put up with in the Megane is comfort – or lack of it. The Cup chassis is superb on the right road, but in town the rough ride will put off some buyers. It’s not so bad as to discourage those who care more about the car’s handling, though, and the brilliant driving position (with perfectly placed pedals) helps compensate slightly.

The cabin is simple but a bit bland, and being based on an old model means it’s not as modern inside as some of its newer rivals. The materials are starting to look dated, and the three-door body means it’s not as practical, either. The boot is rather small, at 306 litres, and the shape of the hatch opening makes getting things in or out tricky. You can fold the seats down to create 991 litres of space, though. Legroom in the back isn’t great, either, and the low roof means poor headroom.

Ultimately, there are better choices for those who want a family car that can also be fun, one being the evergreen VW Golf GTI.