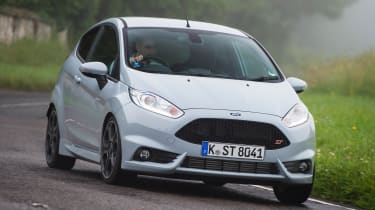 To all intents and purposes, the Ford Fiesta ST200 is a brilliant car. It’s faster and even sweeter to drive than the standard hot hatch, while the added kit adds a layer of glitter to the already smartly styled supermini. But whichever way you look at it, the £3,000 premium is a lot to spend considering aftermarket tuners will do a similar job for 20 per cent of the price.

Hot hatch fans wanting the ultimate pocket rocket have long been pointed to the brilliant Ford Fiesta ST. Even today it remains one of the best fast hatchbacks on sale – despite lacking the firepower of some more modern rivals.

But while the ST was never slow, those wanting a bit more oomph have been forced to employ aftermarket tuners to boost performance and increase power. Now, though, Ford has turned the dial up to 11 and unearthed an extra 19bhp (now 197bhp) from the 1.6-litre turbocharged engine.

We first drove the car on European roads back in June, but now we’ve got the car this side of the Channel to test its mettle on British tarmac. Ignore the German plates – this is a right-hand-drive UK car delivered straight from the factory in Cologne.

In addition to the extra power, the ST200 also benefits from a small gearbox tweak, some changes to the steering, dampers and anti-roll bars, as well as a reprogrammed ESP system. There’s some extra kit and unique paint, too. 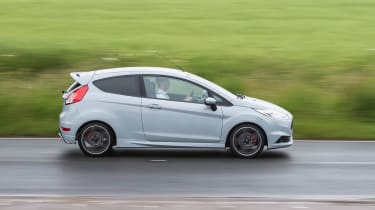 On paper, the ST200 is two tenths faster than the standard car from 0-62mph.

The engine is a masterpiece and never feels short of puff, which comes thanks in part to a new overboost function, which raises the ST200’s standard 197bhp to 212bhp for 20-second bursts. Torque is also up to 290Nm (from 240Nm), while on overboost this ticks to 320Nm. It’s particularly handy when overtaking, when the Fiesta’s near-instant turbo and third-gear pull is nothing short of astounding.

It possesses all the standard car’s zip, but with a little extra fizz. It gets the same addictive exhaust note, while the retuned steering gives it an even greater breadth of ability on twisting country roads. There’s loads of grip to give you confidence to push on, allowing you back on the power far sooner than in some softer rivals. 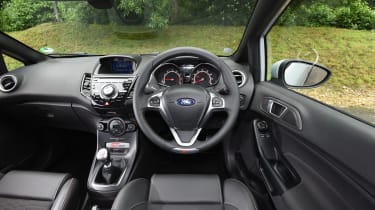 Speaking of which, Ford’s engineers claim to have retuned the dampers to make the car more comfortable. These changes have actually been made across the Fiesta ST range, and while it’s still a firm car, there’s definitely a more compliant edge to it over rougher roads. Moreover, it doesn’t adversely affect the handling.

So, the ST200 is everything we want from a fast Ford. It’s quick, great to drive, looks great and will cost barely any more than the normal ST to run. What’s more, you’ll find new illuminated tread plates, part-leather Recaro sports seats and silver-striped seat belts. It’s a shame Ford is stuck with the old fashioned mobile phone-based fascia and dated infotainment screen, but owners of the standard car won’t complain. 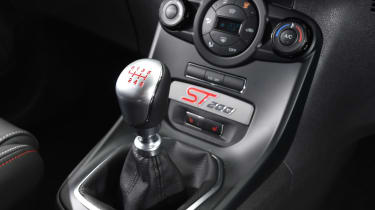 However, while specialist tuners Mountune will charge just £599 for the 212bhp MP215 package, Ford wants an extra £3,000 – over and above the price of an ST-3 – for the ST200. While you won’t get the steering and gearbox tweaks with the Mountune setup, you do retain that all-important manufacturer warranty.

Ford reckons only 400 will come to the UK, so exclusivity is guaranteed for those lucky enough to get their name down for one. As a new buy it’s a tricky sell – but in years to come this ST200 will go down as one of the truly great fast Fords.