'Racing' upgrades add more power to the already feisty Fiesta, but they could invalidate your Ford warranty 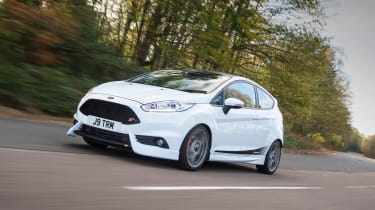 Speed freaks and diehard fast Ford fans won’t question the £2,295 cost of the MR230 upgrade, but as a trade off you’ll have to put up with some refinement issues. If it were our money we’d suggest you go for the MP215 upgrade, keep your manufacturer warranty, and you’ll have one of the best hot hatches around.

The Ford Fiesta ST has been one of our favourite hot hatchbacks for a while now, and it was made even better a few years ago when Ford tuning specialists Mountune released a kit to increase power and seriously up the ante. We've already driven the MP215 upgrade, which at £599 for an extra 33bhp boost seems a bit of a no-brainer.

Now, though, the company has stepped up its game and released a 'Racing' kit. The MR230 setup adds another 15bhp to the Fiesta, taking the figure up to a total of 227bhp - very close to the 246bhp on offer from the Ford Focus ST. The power gains come through the addition of a new high-flow air box, alloy intercooler, air filter and cat-back exhaust. 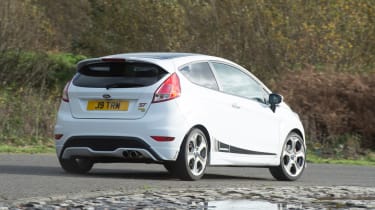 It can be applied to any current-generation ST and takes around seven hours to fit. The work needs to be carried out either at Mountune HQ or at one of the ‘PRO’ Ford dealers dotted around the country. The price for all the above is £2,295 – a hefty whack for a few extra horsepower.

On the road, the ST MR230 is quick – very quick, in fact. It’ll sprint from 0-60mph in 5.9 seconds, which is not only a full second faster than the standard car, but six-tenths faster than the bigger, more powerful Focus ST.

The extra 50Nm of torque comes in handy, too. The in-gear acceleration is simply mind blowing, allowing you to pass slower moving traffic with ease. The turbo seems perfectly tuned and constantly on boost, allowing you to pull up motorway slip roads at lightning pace. You’ll need to watch your speed, though, as you’ll be past 70mph before you know it. 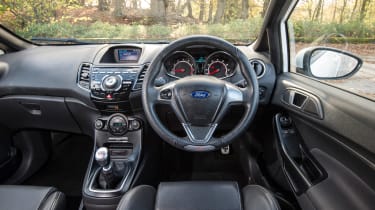 The noise has been turned up a notch, too. The new exhaust emits a pleasing rasp under hard acceleration, but it quickly turns into an intrusive drone on the motorway. Our car also had an uprated spring kit fitted, which made the car unbearably firm. We’d stick with the standard setup as it’s still delivers pinpoint handling, while also being far easier to live with day-to-day.

And that’s the beauty of the Fiesta ST. It’s just as simple to drive as a humble 1.0-litre EcoBoost. As you’d expect, the cabin is identical, with the same rear seat space and a matching boot. 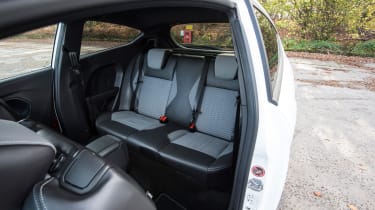 The biggest issue is the lack of manufacturer warranty. The ‘Performance’ kits – like the MP215 package fitted to our old long-termer – maintain Ford’s original guarantee, but these higher-spec ‘Racing’ kits invalidate it. Mountune does offer a 12-month/12,000-mile warranty on all parts supplied though, so if your ST is more than two years old, you’ve not much to lose.