Official tuner works magic on our favourite hot hatch, and we see if it’s made the best even better 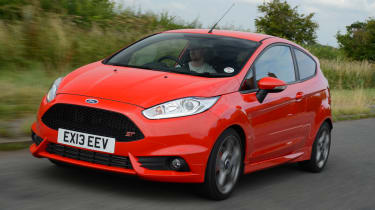 If you’ve already bought a Ford Fiesta ST, you should book an appointment to get these Mountune upgrades fitted. The standard model is exceptional, but the Mountune kit manages to improve on that with better mid-range responses and improved everyday flexbility. The best bit is that it costs only £599 and doesn’t void your manufacturer warranty.

It's hard to imagine how our 2013 Hot Hatch of the Year could get any better – but giving it more power always helps, right? Ford’s accredited tuner, Mountune, has now boosted the Fiesta ST’s output from 178bhp to 212bhp, although thankfully it’s left everything else well alone.

The boost comes courtesy of a new airbox and air filter, plus a tweak to the engine calibration, and while the updates don’t sound that drastic, they definitely change the Ford Fiesta ST engine’s character. There’s more torque between 2,500rpm and 4,000rpm, so where before you may have had to change down, you can now just keep it in gear and ride the generous surge of acceleration. The official figures reveal the jump in performance, too, with 31-62mph in fourth gear taking seven-tenths of a second less than before, at 5.7 seconds.

What’s more, there’s a slightly harder edge to the noise this engine makes. You get more  of a growl in the cabin and more turbo noise from the outside, providing one of the few clues that this isn’t a standard ST.

But you won’t be able to spot a Mountune as it drives past, unless you catch a quick glimpse of the tiny yellow badge mounted on the bootlid. Otherwise, everything inside and out is visually identical.

The good news is that because the changes are limited, the price for this Ford Fiesta ST Mountune upgrade is reasonable, at just £599. You’ll have to pay extra for fitting, but the process takes an hour and can be carried out at hundreds of approved dealers in the UK. Best of all, it doesn’t affect your warranty, and all Mountune parts are covered for 12 months and 12,000 miles.

The Ford Fiesta ST wins easily because of how crisp and sharp it feels in corners – Mountune didn’t need to change anything here. Quick changes of direction seem to be the simplest thing in the world, as the car sticks to the tarmac and the body stays totally composed. Only some far more expensive performance models feel as much at home on twisty roads as the ST, and its talents are accessible to experienced drivers and novices alike.

The quick, accurate steering and fantastic brakes are enough to give anyone confidence to drive quickly, especially with the excellent Recaro seats holding you firmly in place.

For all its ability, though, you’ll have to be willing to put up with the Ford Fiesta ST’s unforgiving ride. It never crashes noisily over big potholes; instead, you feel it as an abrupt thud rather than the soft landing you’d get in a standard Fiesta.

However, if you’re already considering this fast Ford, the firm ride is unlikely to put you off. And the question then is whether you should pay the extra for the Mountune upgrade. If it was really expensive or compromised your warranty, you could argue against it, but for us there’s no reason not to go for it. You’d be mad to miss out on the opportunity to make one of the best hot hatches in recent memory even better.