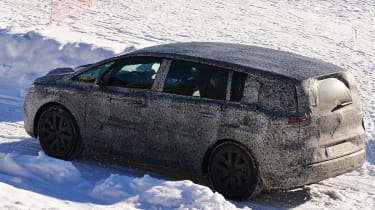 Renault has begun testing an all-new Espace, and underneath the camouflage you can see a bold design inspired by the R-Space and Initiale Paris concept cars. Design bosses wanted to move away from the boxy, upright design of the current car, and the narrow glasshouse and raked windscreen do give it more of a sporty profile.

The latest information is that the new Espace won’t be sold in the UK, having been dropped from the Renault line-up along with the Koleos, Laguna, Wind and Modus.  But we’re expecting a debut at the Paris Motor Show in October for the new model, before sales begin shortly after.

The new Espace will also become the first model to debut Renault’s luxury Initiale Paris high-end trim level – it’s a bit like Ford’s Vignale brand but the French manufacturer will concentrate on design, materials and quality rather than customer service.

The Clio will also get an Initiale Paris version in 2015 but also won’t be offered in the UK. Ken Ramirez, UK boss at Renault said: We are still building the Renault brand [after axing a number of models in 2011]. It’s too soon for us. The Clio is fantastic value in its own right, and this would dilute the message.

Underneath, the next-generation Espace will use a new CFM1 modular platform, which is thought to be versatile enough to underpin models as small as the future Megane. It’ll also be used across a range of future Nissan products as part of the Renault-Nissan alliance.

As with the Initiale Paris concept, which debuted at the Frankfurt Motor Show in 2013, expect to see a the kerbweight cut down significantly compared to the current Espace, and the engine line-up consisting of efficient four-cylinder petrol and diesel turbos.