Stylish two-seat roadster blows in to the UK 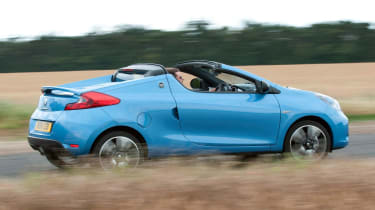 There are plenty of reasons why someone should buy a Wind. It’s funky styling, impressive 44.8mpg economy figure and ingenious folding roof are just a few. But, the numb steering means it falls ever so slightly short of being the great all-rounder it could have been. Instead it remains a very capable and good value for money fashion-conscious roadster.

Meet the new Renault hoping to take the coupe-cabriolet market by storm! This Twingo based roadster is called the Wind and its unique styling means it looks like nothing else on the road. But is that enough to make a splash in this competitive segment?

The Wind certainly stands out from the crowd, but it’s fair to say that the styling will divide opinion. The silver-rimmed air vents and blue detailing in the headlights are neat touches that round off the controversial design.

The newcomer has a few tricks up its sleeve too, including a folding hard-top that flips backwards the boot without denting the 270-litres of boot space. Inside, the cabin is well laid-out and the low driving position is good. Rear visibility is obstructed however, by the high door edge which merges seamlessly into the back of the car.

On the road, the entry-level 99bhp turbocharged 1.2-litre engine fitted to our model is good for most people’s needs– as highlighted by the Wind’s respectable 10.5 seconds 0-62mph time– but it has to be worked hard when overtaking. A 133bhp 1.6-litre engine is also available.

Thanks to its Twingo underpinnings, the Wind is agile in the bends and has to be really pushed before it loses grip and begins to veer off course. It’s a shame then that the steering is lacking in feel and slightly dulls the shine of the very capable chassis.

The ride is comfortable enough over rough roads but large potholes that wouldn’t unsettle the more rigid Twingo send a crash through the cabin.

In Dynamique S trim, our model costs £16,400 and benefits from 17-inch alloys, automatic climate control and an updated stereo system with Bluetooth over the cheaper Dynamique trim. For an extra £900, Collection spec adds chrome detailing, heated front seats and automatic lights and wipers.

At that price, the Wind looks like good value for money and for fashion conscious buyers looking for something a little different, it could be just the thing. As a drivers car though, there are better options.