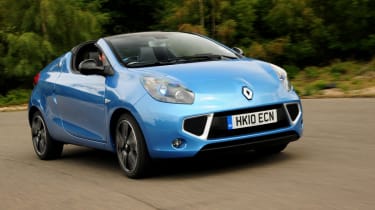 As one of the smallest and most affordable cabriolets on the market, the Renault Wind holds plenty of appeal. A strict two-seater, there's just one body style on sale but much of the mechanicals are shared with the Twingo supermini. Despite these humble origins, the Wind is an appealing prospect, offering good looks and a fine handling chassis. A Gordini version adds a host of cosmetic extras to boost its visual flair, and the only let downs are its limited pratciality and the cheap feeling interior.

There are two petrol engines to choose from, a naturally-aspirated 1.6-litre unit with 131bhp and a turbocharged 1.2 with 99bhp, which is the one to go for. The extra torque from the turbo means its much more relaxing to drive and its almost as quick as the more expensive 1.6. The chassis was tuned by the Reanultsport team responsible for the firm's brilliant hot hatches, so the Wind is suitably poised through corners, with light direct steering and plenty of grip, although models with bigger wheels have a firm and jittery ride on all but the smoothest road surfaces.

The Wind's running costs are very reasonable for a car of this type, with both engines managing to return mid-forties fuel economy. The 1.2-litre turbo is cleaner when it comes to emissions though, with 145g/km compared to the quicker car's 160g/km. Because most of the mechanicals are shared with the Twingo, parts and servicing are affordable. Small, light cars like the Wind need their brakes, tyres and other ancillaries replacing less often too. No diesel version is planned though.

The Wind has a lot of kerbside appeal for such a small car. With the wheels pushed deep to each corner, a sculpted bonnet and high boot line, it does a good job of impersonating a much bigger sports car. The 'targa' style roof folds away in just 12 seconds, and all versions come with alloy wheels as standard. Flagship Gordini models add coloured alloys, white racing stripes on the bonnet and leather seats. Inside, the Wind loses some of its charm. The swathes of grey plastic are hard to the touch and, although it's quite well equipped, it's not a particularly pleasant place to spend time. Although it's very keenly priced compared to rivals.

The Wind is more practical than other small convertibles like the Mazda MX-5, and that's mainly down to the clever roof. Whether its up or down, bootspace remains fixed at 270 litres, which is more than many superminis, including the Fiat 500 and Ford Ka. It only have two-seats though, and the steering wheel doesn't adjust for reach. This can make finding the ideal driving position tricky.

The Twingo on which the Wind is based didn't perform well in crash tests, but the Renaultsport team responsible for developing the Roadster spent lots of time adding strengthening beams in key areas like the doors and roofline, so it should perform better in the event of a crash. It comes equipped with twin front and side airbags, electronic stability control, an engine immobiliser and deadlocks. The company's reputation for reliability is improving with every new car they make, but the Wind's cheap interior might let it down. No problems have been reported as yet, and both the car's engines have a proven track record in other models in the range. 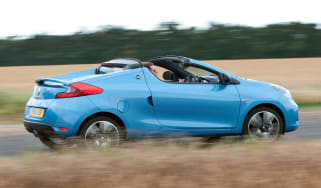 Stylish two-seat roadster blows in to the UK
Renault Wind 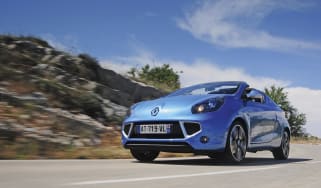 New star blows in to shake up coupé-cabrio class.
Skip to HeaderSkip to Content