New star blows in to shake up coupé-cabrio class. 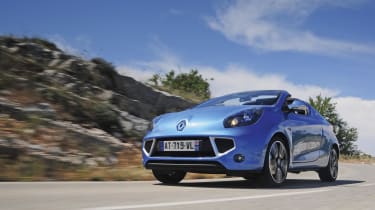 The Wind lets you have your cake and eat it – in more ways than one. Its ingenious roof offers open-air thrills at the touch of a button but doesn’t encroach on the sizeable boot, while the Renaultsport-derived engine sounds superb and loves to be revved, yet still returns 40mpg-plus. The Renaultsport DNA is also evident in the sharp handling, but there’s none of the harsh ride of the Twingo RS. With prices starting from a mere £15,500, there’s very little not to like.

A storm is brewing in the coupé-cabrio market! This is the Wind – aclever two-seater based on the Twingo which seeks to offer a realbreath of fresh air for drop-top buyers. Auto Express was first todrive the desirable roadster.

Renault has taken a new look at folding hard-tops and come up with aunique and surprisingly practical solution. Twist a handle above yourhead, push a button on the dash and in 12 seconds the single roof panelflips back on its hinges, resting on top of the boot, before a coverslots neatly into place. The Ferrari 575 Superamerica used a similarmechanism, but it’s never been seen on a car in this class.

The benefit of ditching tiny rear seats is that with the roof up ordown there’s an impressive 270-litre boot – roughly the size of theClio’s. And at only 22kg, the roof and its mechanism keep the car’sweight to a minimum.

The chunky, aggressive design is certain to turn heads. Chrome cowls onthe roof cover and an integrated boot lip spoiler give the rear itsunique identity, while there’s an entirely new front end and steeplyraked screen. On our South of France test route the car caused quite astir, with style-conscious residents reaching for their camera phones.

Inside, familiar switchgear faces you as you sit low in heavilybolstered seats. The trade-off is limited visibility; the pillar boxrear window gives you little idea of what’s going on behind, and thegauze wind deflector obscures what you can see.

You can choose from two petrol engines: the high-revving, 133bhp1.6-litre unit lifted from the Twingo Renaultsport or a smoother 100bhp1.2 turbo. We drove the former, which needs to be worked hard toproduce its best. However, past 5,000rpm it races to the red lineaccompanied by a brilliantly raspy exhaust note. For most buyers,though, the smaller, quieter engine will be easier to live with aroundtown.

Despite weighing around 150kg more than the Renaultsport Twingo, andlacking the more extreme hatch’s hard-edged suspension, the Wind ishuge fun in bends. The Renaultsport engineers’ input really shows:while the electric steering offers little feedback, the nose turns insharply and the car feels light on its feet. It has clearly beeninfused with Renaultsport DNA, despite there being no RS badge on theboot.

The French firm deserves plenty of credit. It’s created a car whichappeals to both keen drivers and style-conscious buyers alike –something that’s guaranteed to win the Wind many admirers.

Rival: Peugeot 207 CC The craze for affordable coupé-cabrios began with the 206 CC in 2001.This variant picks up where its predecessor left off, with good looksand entertaining dynamics. It’s just a shame roof-down driving robs youof a usable boot.