With its folding metal roof, the Peugeot 207 CC brings open-top fun to the supermini class 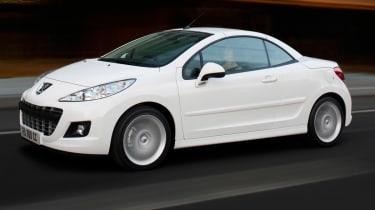 The Peugeot 207 CC is a rival to the MINI Convertible and Fiat 500C, but is unique in the convertible supermini class in having a folding hard-top, rather than a fabric roof. This means it’s slightly more expensive than its rivals, although buyers are often won over by the greater refinement with the metal hood in place. Peugeot offers a range of 1.6-litre petrol and diesel engines, while equipment is generous across the line-up, with even entry-level Active models getting 16-inch alloy wheels and air-conditioning. The 207 CC is good to drive, too, serving up a decent balance of comfort and agility.

You get a fine balance of ride comfort and handling agility in the Peugeot 207 CC. Its suspension is quite soft, so the car takes rough roads in its stride, but it’s firm enough to provide fun in corners, and the responsive steering adds to the appeal. The only letdown is the gearbox: the five-speed and six-speed manual boxes have come in for criticism across the 207 range for their vague shift action. The 154bhp 1.6-litre THP turbo engine is the strongest performer, but most buyers will find the cheaper 1.6 VTi adequate enough, while the 1.6 HDi diesel has similar performance to this, and is a popular choice for its lower running costs.

Compared to rivals like the MINI Convertible and Fiat 500C, the Peugeot 207 CC looks expensive, although some buyers will be prepared to pay extra for the greater security and refinement a folding hard-top provides. Diesels are the most cost-efficient cars to run, returning 57.6mpg economy and emitting only 127g/km of CO2. Mid-spec Allure cars come very well equipped, with 17-inch alloys, stability control and rear parking sensors, but for most buyers, the entry-level Active will have sufficient kit for the money, as it gets air-conditioning and a USB input for MP3 players, as well as Bluetooth hands-free. All cars are available with Peugeot’s great-value Just Add Fuel package, which covers three years’ servicing, insurance, road tax and roadside recovery.

The Peugeot 207 CC looks good whether the roof is up or down. It’s not quite as stylish as soft-top rivals like the MINI Convertible and Fiat 500C, as designers had to incorporate a long rear deck to make space for the roof folding mechanism, while the windscreen is steeply raked. But from the front it looks identical to the standard 207 supermini, and the dashboard layout is very similar to the regular car’s, too. That means decent build quality – certainly better than in the original 206 CC that this model replaced – while there’s plenty of equipment. Entry-level Active versions feature air-con, electric windows and USB and Bluetooth connectivity.

It’s best to view the Peugeot 207 CC as a two-seater with extra storage space in the back, as the rear seats aren’t much use to adults. Convertible buyers are generally prepared to make sacrifices on practicality, and it’s a good job, because although the 207 CC provides a generous 449-litre boot capacity with the roof in place, this is reduced to a meagre 187 litres when the hood is folded. Owners also need to watch out when climbing aboard, as it’s easy to bang your head on that steeply raked screen. The A-pillars don’t help visibility at roundabouts, either.

Euro NCAP awarded the Peugeot 207 CC five stars for occupant protection when it crash tested the car, and it comes with five airbags and active rollover hoops, finished in chrome. Disappointingly, stability control is an option on entry-level Active models, although it’s standard on Allure and Roland Garros versions, while the higher-spec cars also get rear parking sensors. The 207 CC has a much better reliability record than the 206 CC it replaced – it’s more solidly put together than Peugeot’s first attempt at a modern coupe-cabrio – although owners have still reported electric problems with the later car. 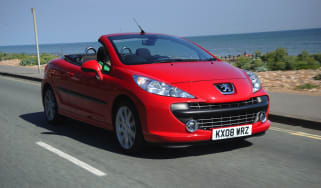 Does nip and tuck keep cabrio in contention?
Skip to HeaderSkip to Content