The future of Saab starts here. Now the firm has broken its ties with Subaru, it's promising forthcoming models will be much bolder to look at and sportier to drive - vital if the struggling brand is to attract more buyers. 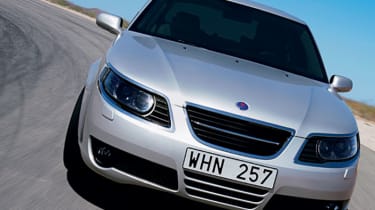 Launched in 2001, the 9-5 should have made way for an all-new car by now. This revised version is still very comfortable, will appeal to traditional Saab customers and has a strong engine range - particularly the new diesel. But look past the facelift and little has changed. Its rivals handle better and feel more upmarket - leaving the price as a key factor in its appeal.

The future of Saab starts here. Now the firm has broken its ties with Subaru, it's promising forthcoming models will be much bolder to look at and sportier to drive - vital if the struggling brand is to attract more buyers.

The new dawn is being ushered in by the revised 9-5, which not only gets a facelift but also a host of changes under the skin, aimed at putting it on terms with BMW's 5-Series and Audi's A6. It has to last, too - a replacement isn't due until 2009. So has the company done enough? Auto Express got behind the wheel to find out.

With every panel ahead of the A-pillar completely redesigned, plus a fresh rear, the new 9-5 is certainly impressive to look at. Key is the 9X concept-derived front, with its new headlight and grille combo, ringed in thick, bright chrome.

In the flesh, the car is best finished in light metallic colours - the contrast of the chrome against darker paint looks odd. Saab admits the styling is controversial. "The 9-5 won't please everyone," said chief designer Simon Padian. "But then we didn't set out to."

Inside, the centre console is simpler, with new ventilation and stereo controls, plus a sporty three-spoke steering wheel. It's just a pity material quality still isn't up to the standard of some rivals, while the electric window switches are sited awkwardly by the handbrake. Even so, the driving position is good and, thanks to Saab's sculpted seats, the 9-5 is one of the most comfortable cars on sale.

Under the bonnet, the 2.2 and 3.0-litre diesels have been replaced by the 150bhp 1.9-litre co-developed by Fiat and General Motors - although GM's 3.0 V6 won't be offered, leaving the 9-5 out of step in the performance stakes.

The all-turbo petrol range is wide, though, comprising a 150bhp 2.0-litre and 185bhp, 225bhp and 260bhp versions of Saab's 2.3-litre engine. All are mated to a five-speed gearbox, which feels a bit notchy. An auto is optional.

In a bid to give the 9-5 sportier handling, the firm has stiffened the suspension and added thicker anti-roll bars, while the top-spec Aero rides 10mm lower and gets larger 17-inch alloys. But head on to a twisty road and you'll find this hasn't achieved the desired effect.

The steering remains vague and the suspension is biased towards comfort rather than agility - although this, com-bined with the excellent seats, does mean the Saab is a brilliant motorway car, even if wind noise is noticeable. As for the engines, the 260bhp Aero is fast but ferocious - spinning its wheels too easily - and while all the other units provide strong performance, the 150bhp diesel is easily the best all-rounder.

It's not the most refined oil-burner, but has a good spread of power, returns 44mpg and emits 174g/km of CO2. As 70 per cent of 9-5 customers will be company car drivers, this is important.

Safety kit still impresses, with standard stability control and active headrests, plus a five-star Euro NCAP crash test rating. And with prices from £21,500, the basic TiD is £4,000 less than Audi's A6 2.0 TDI. Yet for all the changes inside and out, the 9-5 still feels like an old car compared to its rivals - which is worrying with an all-new model so far away.