Swedish brand fights back, but can drop-top help it survive? 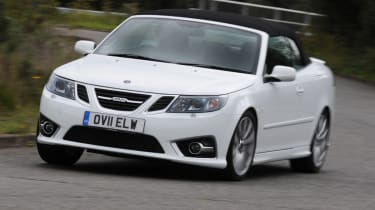 The 9-3 isn’t a bad car. Its turbo engine delivers decent performance and sounds good, and the Saab is fun to drive. Even the exterior styling has aged well. But why would you pay around £30,000 for a nine-year-old car when you can have a new Audi A5, BMW 3 Series or Mercedes C-Class for similar money? If Saab is to survive, it needs some new models – and it needs them now.

Times are tough at Saab. Production has frequently stopped, workers have gone unpaid and the firm has pulled out of the Frankfurt Motor Show to save money. So the fact that an updated 9-3 has arrived at all is an achievement. However, can a nine-year-old car really improve a company’s fortunes?
We’ve driven the top-of-the-range 217bhp turbocharged petrol Convertible in Aero spec, although the same changes have been applied to the saloon and estate versions.
Visually, the modifications are limited to a fresh front bumper, reshaped headlights and a new grille. Inside, metallic trim is added to the instrument panel; on Aero models, there’s also a cheap-looking ‘graphite-fibre’ surface here, as well as

on the doors and glovebox.
Look beyond the tail-lights, which appear to be outlined with gaffer tape, and the soft-top 9-3 is still a handsome car. But the interior is really showing its age. Although pleasingly minimalistic and easy to use, the quality is at least a generation behind rivals such as the Audi A5 Cabriolet, while the graphics on the sat-nav screen look tired. And when we went to adjust the steering wheel, the lever came away in our hands.
Smooth
Twist the key in the trademark ignition barrel, located next to the handbrake, and things start to improve. The new 217bhp 2.0-litre petrol engine is smooth and quiet – until you stamp on the throttle, when the turbo emits a pleasing and Saab-like whoosh from under the bonnet. A boost gauge, located in the instrument cluster, harks back to the firm’s successful cars from the past, too.
Our model was fitted with the £1,555 optional six-speed auto, and it made for serene progress. Squeeze the throttle, however, and it’s slow to kick down and make the most of the engine’s performance. If you’re in a hurry, we’d recommend the manual.
Other power options include a 161bhp version of the same 2.0-litre petrol turbo, as well as a more efficient 1.9 TTiD diesel with either 158bhp or 178bhp.
The hydraulic power-steering benefits from increased feel, which is so often lacking in more modern electric set-ups. Driving the 9-3 on fast, sweeping roads can actually be a lot of fun. But, in most other respects, Saab has stood still while its competitors have taken huge leaps forward.
Share this on TwitterShare this on FacebookEmail