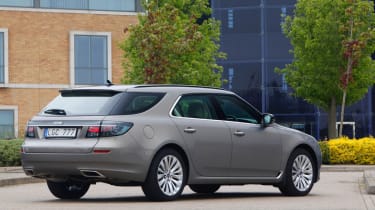 The second-generation Saab 9-5 SportWagon arrived too late to make an impact in the market, as it coincided with the moment that Saab was wound up as a company. That's a real shame, because it had the potential to take on and beat rivals of the time such as the Mercedes E-Class and Volvo V70.

Building on the 9-5 saloon, the Sportwagon featured a clever U-rail cargo system as standard and an optional electric tailgate. At more than five metres long there was plenty of space for passengers and luggage. Under the bonnet the same engines were carried over from the saloon, and there was a choice between front-wheel and XWD four-wheel drive, as well as auto and manual six-speed gearboxes.

However, the chances of you buying one are nil - only a few models were ever produced, which made their way to the press for review, but full production never happened, as Saab shut its doors for good in December 2011.

The review below was written when we drove one of those early cars, and provides an insight into how the 9-5 SportWagon could have done.

As a workhorse, it’s hard to recommend anything but a diesel in the Saab 9-5 Sportwagon, with the 2.0 TTiD offering 187bhp and 400Nm at 1,750rpm. It’s only available with the slightly clunky six-speed manual gearbox though, so those after an auto will have to settle for the gruff 2.0 TiD with 158bhp. The larger wheels do contribute some tyre noise to the cabin, and the 9-5 Sportwagon is at its best when fitted with the DriveSense adaptive chassis – although no matter what options you tick, the Saab always has a firm edge to its ride. Unlike the 9-5 Saloon, the Sportwagon model can be specified with a reversing camera, to make manoeuvring into tight spaces easier.

Taking into account standard kit and power levels, the Saab 9-5 Sportwagon is cheaper than almost all of its rivals, including the BMW 5 Series Touring and Audi A6 Avant. But unlike BMW, there are no fixed-price servicing deals and the most efficient 2.0-litre diesel isn’t as clean or frugal as the Audi A6 Avant 2.0 TDI. Petrol models are particularly thirsty too.

The Saab 9-5 saloon causes a split in opinion, but the Sportwagon redresses the balance, with a rear end that's much more in keeping with the rest of the body. Like previous models it uses a wraparound effect for the rear screen, which along with the dark A-pillars makes for a floating roof effect. The cabin is equally impressive, with lots of toys and plenty of space for both occupants and their luggage. There’s plenty of clever load-securing options, and standard equipment is generous no matter which trim level you opt for. And though the 9-5 Sportwagon isn’t class leading for interior quality, it is well trimmed and solidly built.

It’s not as large as the Audi A6 Avant or Mercedes E-Class Estate, but with the seats in place the Saab 9-5 Sportwagon can hold 527 litres of luggage, and when the rear bench is folded flat it expands into a 1,600-litre load area. It’s cleverly designed, with a standard load securing system that features a movable divider, which slots into a U-shaped track on the boot floor to secure smaller items. There’s also a 12V power socket, a lidded cubby, bag hooks, a netted pocket and separate load securing eyelets, while the accessories catalogue plays host to a variety of roof racks and boxes. Because of its extra bulk, the Sportwagon features a reversing camera to make manoeuvring easier.

As standard the entry-level 9-5 Sportwagon is fitted with electronic stability and traction control, six airbags, passenger seat airbag deactivation and active head restraints. Buyers can also add rear seat side airbags, a tyre pressure monitoring system and even a head up display. Saab has been at the forefront of safety for many years, and is credited with being the first to fit side impact beams, safety belts as standard and even the split-field side mirror to maximise visibility, so it’s no surprise the Saab 9-5 Sportwagon is one of the safest cars in its class. A loyal customer base would suggest reliability, build quality and dealer service is up to scratch, too.