When it comes to customer loyalty, Saab is in an enviable position. Few other brands are followed with such passion - or patience. In fact, 9-5 buyers have had to put up with a serious lack of new metal in recent years, but finally the traditionalists' favourite model has been made over. 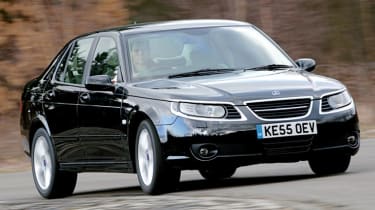 Time has caught up with the 9-5. It's a comfortable and relaxed motorway cruiser, but in most other respects it's becoming dated - and this Aero model has enough power to overwhelm the chassis and expose its flaws. Opting for a diesel estate version will make more sense for most buyers - although competitors are more keenly priced and dynamically superior.

When it comes to customer loyalty, Saab is in an enviable position. Few other brands are followed with such passion - or patience. In fact, 9-5 buyers have had to put up with a serious lack of new metal in recent years, but finally the traditionalists' favourite model has been made over.

Inspired by the 9X concept, the 9-5's chrome-rimmed headlamps and grille are a radical departure for the Swedish maker. Yet is it a facelift too far?

Our UK test car's updated headlights and black paintwork received mixed reactions. New from the A-pillar forward, the fresh design seems to work better with brighter metallic colours, as the sil-ver trim blends into the bodywork. There are new lamp clusters at the rear, too.

Inside, the changes are less radical. Saab's traditional cabin layout remains, along with the trademark air vents and driver-focused dashboard. The seats are very comfortable, but the driving position is spoiled by a short reach adjustment on the steering wheel.

Powered by the range-topping 2.3-litre turbo engine, the Aero model driven here is, on paper at least, a genuine Q-car. It might not look like it, but this understated saloon is capable of hitting 155mph. That's a headline-grabbing figure - yet the rest of the performance package can't live up to the billing.

Impressive Opt for the automatic transmission, and the 0-62mph sprint takes 8.2 seconds. So performance fans will have to choose the manual, which completes the dash in a more impressive 6.9 seconds.

In the real world, both figures are irrelevant, because the front-wheel-drive 9-5 struggles for grip on anything other than a straight, flat road. When there is traction, the Aero's pace is impressive, but most of the time the power is uselessly spun away. Accelerate with any amount of steering lock applied, and there's plenty of torque steer, while the turbo powerplant does little to help, as it takes time to deliver full boost.

Despite adjustments to the steering and the chassis, the poor dynamic ability is emphasised even further by the lack of feedback through the wheel. One thing is certain - this Saab is better suited to motorway cruising than tackling a tight and twisty B-road.

At £28,336, the 9-5 Aero saloon is good value compared to similarly swift executives from Audi and BMW, but it simply can't compete with Germany's finest. A more worthwhile comparison would be with the Vauxhall Vectra - a car which shares the 9-5's platform. Even in performance VXR spec, the Vectra is £4,341 cheaper than the 9-5 driven here. It seems the loyalty of Saab buyers is going to be tested to the limit...