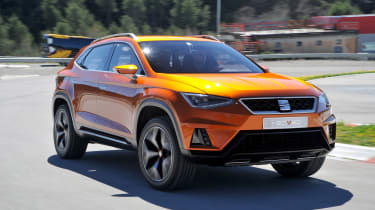 Our test wasn’t meant to reveal how the Geneva concept drove, but was intended to give a taste of SEAT’s planned assault on the SUV market. Expect to see a car very similar to this in your local dealer within the next four years.

Undoubtedly one of the stars of March’s Geneva Motor Show, the SEAT 20V20 Concept previews the top rung in a family of SUVs heading to the UK over the next five years. And just four weeks after it wowed visitors to the SEAT stand, Auto Express got behind the wheel of the high-riding newcomer at the twisty Parcmotor Castelloli in Catalonia, Spain.

Free from the glitz and glamour of a motor show, the 20V20 looks even more stunning. There are countless examples of concept cars not making the transition to the road, but the 20V20 is not one of them. The Spanish sunshine helps show off the razor-sharp creases and new SEAT styling cues to a tee. 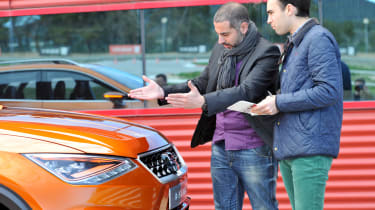 Senior exterior designer Amin Sadek walked us around the car, animatedly telling us: “This four-door coupe SUV is totally design-driven. We are playing with seductive design but with precise lines. The Leon was tremendously influential for us. It is now a ‘formula’ – a formula made up of superb design but high functionality, and we have applied it to this car.”

The x-shaped front end, where the ‘x’ meets at the prominent ‘S’ badge, is expected to appear on all future SEATs. You can add those sleeker headlamps to that list as well, and the tail-lights will appear on SEAT’s rival to the Nissan Qashqai, due next year.

On the inside, the 20V20 Concept has just four seats, but each provides plenty of space. More importantly, though, the car is bristling with innovation. Two large screens – one for the driver, the other for the passengers – showcases a variety of information, yet what stands out is the way the screens are controlled. 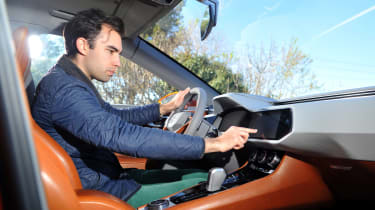 A small metal disc called the Personal Driver Device – inspired by the electromagnetic heart from the Iron Man movies – slots into the centre console, and it not only acts as the infotainment system’s rotary dial, but also as the stop/start button. When it’s out of the car and in the driver’s pocket, it can locate the car and allows owners to set the sat-nav remotely.

We were limited to low speeds behind the wheel of this priceless hand-made concept, so it’s impossible to give a verdict on how it drives. But the main thing is that it drives at all; the 20V20 Concept previews a car that’s set to get the green light from SEAT bosses. 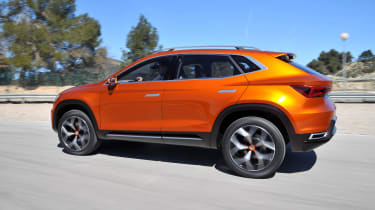 It will form the third ‘pillar’ in the brand’s assault on the SUV market. A Qashqai rival will be revealed next year, and that’s expected to be joined by a Nissan Juke rival. These smaller cars have been christened Princes William and Harry respectively. Completing the family will be a Range Rover Evoque rival very similar to the 20V20.

While Skoda will offer a seven-seat SUV, SEAT’s positioning as the sporty brand in the VW Group means it will build a five-seat coupe-like SUV with a range of petrol, diesel and plug-in hybrid powertrains. This could arrive as early as late 2018, joining the range in time to replace the seven-seat Alhambra MPV.

Incidentally, the 20V20 concept uses a 2.0-litre turbo petrol engine from the Leon Cupra 265, plus electronically controlled four-wheel drive and a DSG twin-clutch auto gearbox – hinting at the possibility of a hot Evoque rival, too.