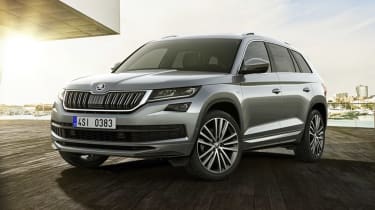 The Skoda Kodiaq is now available in flagship Laurin & Klement trim, featuring “even more creature comforts, safety systems and driver technology” than the existing high-end Edition variant, according to the Czech firm.

Available to order now, the Skoda Kodiaq Laurin & Klement costs from £35,945. That gets you the modest 148bhp 2.0-litre TDI engine mated to a six-speed manual gearbox. The DSG version costs £37,245, but all models come with four-wheel drive.

The Laurin & Klement trim already features on the Octavia and Superb, adding extra kit to the already well equipped mainstream models. The Skoda Kodiaq L&K gets a chrome grille, 19-inch wheels and unique bumpers. Body coloured trim gives it a premium edge, further separating it from the rest of the SUV range. 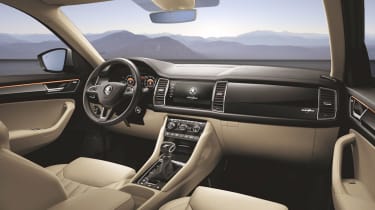 Inside, all models get leather seats with L&K logos. There’s swathes of piano black trim, ambient lighting and aluminium pedals, as well as a standard-fit panoramic roof. The firm’s Columbus infotainment system and CANTON stereo are also included.

Skoda claims all the added kit equates to a cost saving of around £450 over the equivalent Kodiaq Edition, which also boast LED lights, dual-zone climate control and all-round parking sensors. First deliveries of the Kodiaq L&K are expected later this year.

What do you think of the new top-spec Skoda Kodiaq Laurin & Klement? Is it worth the extra cash over the normal Edition version? Let us know in the comments below…

The Skoda Kodiaq is a large SUV that scores well for practicality, comfort and value
Best SUVs to buy 2020