The popular Smart ForTwo Cabrio is back, and it'll be available to order in November - with deliveries in 2016 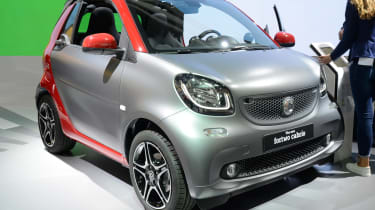 Smart has revealed the second member of the ForTwo family; the Cabrio. Now in its third-generation, the soft-top has appeared at the Frankfurt Motor Show and will be available to order in November, with first deliveries at the start of 2016.

Smart sold over 220,000 versions of the Cabrio in the ForTwo’s 17-year history and as a result the formula hasn’t changed, although Smart claims to have made better everything that was loved about the old car and addressed everything that wasn’t.

Like the standard ForTwo, the Cabrio has done some growing up to help achieve this. It remains the same 2.69m in length, but the track is 100mm wider than before to increase safety, stability and passenger space. The ‘tri-top’ three-layer fabric roof is four per cent larger than before and 20mm thick, featuring a heated glass rear window.

Customers can choose between red, black or blue material colour for the roof, which can be opened electrcially in 12 seconds at up to 96mph – the ForTwo’s top speed. The roof can also slide back at the touch of a button from outside the car using the keyfob, although if you want to go completely topless you’ll still have to remove the roof bars above each door by hand. Happily, these can be stowed in the boot.

Under the skin, Smart claims the new cabrio is the most structurally rigid it’s ever produced, with ultra-high strength steel contributing to a 15 per cent improvement in torsional strength.

The rest of the ForTwo Cabrio is business-as-usual, meaning a choice of a 70bhp 1.0-litre naturally aspirated petrol and an 89bhp 0.9-litre turbo petrol mated to a dual-clutch transmission or, for the first time, a five-speed manual. 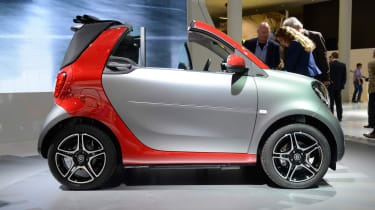 The cabin also remains unchanged from the hard top, with the same quirky layout, colourful materials and optional seven-inch infotainment system with MirrorLink smartphone integration.The same three trim levels can be had, with a vast array of exterior and interior personalisation options available.

Prices for the Cabrio will be revealed following a debut at Frankfurt, but we’re expecting around a £1,500 premium over the standard model.

Now read about all the cars at the Frankfurt Motor Show with our handy round-up.