Toyota's new taxi is on sale now, with the firm aiming for it to become a familiar sight on Tokyo's streets during the 2020 Olympics 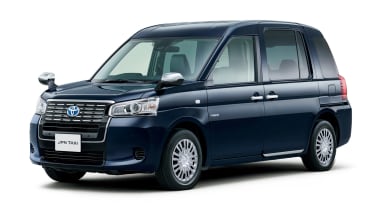 Toyota has revealed a new LPG-hybrid taxi for Japan ahead of the Tokyo Motor Show, which is on sale in its native Japanese market now.

Compared to the usual Toyota Comfort taxicabs that dominate Japanese streets, the new cab, known as the JPN Taxi, is much more black cab in appearance, boasting a tall shape with large windows for passengers.

Toyota says that the new taxi has been designed with accessibility in mind, justifying the black cab like proportions. It boasts a low flat floor for easy access and ingress, plus a power sliding rear door and a rear passenger space said to be large enough for wheelchair users. Elsewhere, the rear seatbelt receptor is illuminated with LEDs to make them easy for passengers to find at night, and the windows are soundproof too.

The dashboard adopts a tall look with gadgets and tech a taxi driver could need swarming around the steering wheel, though the navigation system and the fare meter have been placed so that passengers can see them easily, too. Interestingly, the driver's seat is trimmed in black leather, to distinguish it from the brown leather seats reserved for riders. 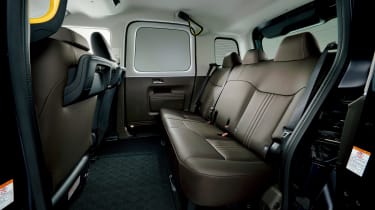 Exact powertrain specifics aren’t defined, but Toyota says that the JPN Taxi makes use of a liquid petroleum gas engine and an electric motor, making it an LPG-hybrid. Performance details are under wraps, but 55mpg is claimed.

What do you make of Toyota's new take on the taxi? Tell us in the comments below!