Toyota is going to build its moon buggy concept

The Japanese auto manufacturer and JAXA will build a prototype lunar rover by 2021, ahead of the finished product’s launch in 2029 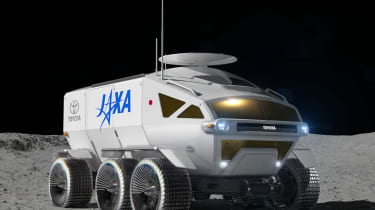 Earlier this year, Toyota announced a partnership with the Japanese Aerospace Exploration Agency (JAXA) which would see the pair design and build a manned, pressurised lunar rover. A tentative timeline for the project has now been set, with the first prototypes expected to arrive in 2020, and the finished rover due for its inaugural mission in 2029.

Initial prototypes will be little more than repurposed production cars, although a 1:1 prototype will arrive by 2022. The following seven years will then be used to design the mission’s flight model and manufacture the finished rover. When the project reaches its head, the rover will be used to study the moon’s polar regions, with the aim of investigating the possibility of using the moon’s natural resources (such as frozen water) in future missions.

Toyota and JAXA’s rover will be powered by a fuel-cell electric drivetrain, with the pair targeting a total lunar surface range of more than 10,000km (6,200 miles). It’ll measure six metres long, five metres wide and almost four metres tall, making it twice as long, twice as wide and almost five times the height of the Moon Buggy used on the Apollo 15 mission.

Toyota claims its lunar rover will comfortably accommodate two astronauts (or four in emergency situations) in its 13-metre-squared living quarters. Other features include a huge retractable solar panel, air-less tyres and an array of communications equipment.

JAXA’s Vice President, Koichi Wakata, set out the firm’s plans for space exploration, stating: “Manned, pressurized rovers will be an important element supporting human lunar exploration, which we envision will take place in the 2030s. We aim at launching such a rover into space in 2029.”

Toyota seems to have its sights set on a more terrestrial level, and is keen to see how its partnership with JAXA will advance battery-electric and fuel cell technology for its earthbound vehicles.

“Our joint studies with JAXA are a part of this effort. Being allowed to be a member of 'Team Japan', we would like to take up the challenge of space.”

What do you make of Toyota’s planned lunar rover? Let us know in the comments section below…