This is the Toyota GT 86 Club Series Blue Edition. It’s the second model to join the Japanese firm’s Club Series lineup, which was launched to celebrate Toyota’s motorsport heritage. Prices start from £29,980.

As its name suggests an exclusive exterior finish marks out the Blue Edition, while contrasting black detailing has been applied to the front grille, rear spoiler and diffuser. The cabin has also been trimmed in Alcantara and black leather.

Under the skin the Blue Edition makes use of the same 197bhp 2.0-litre four-cylinder Boxer engine used in the standard GT 86, which can be paired with either a six-speed manual or automatic gearbox. The manual is the quicker of the two taking a claimed 7.7 seconds to get from 0-62mph, while the auto takes 8.4 seconds. Top speed is 140mph and 130mph respectively. 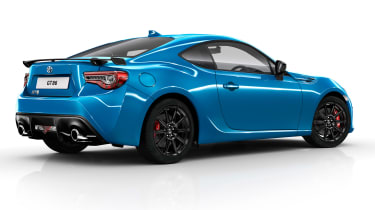