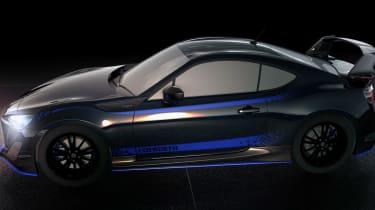 Cosworth has announced a series of power packages for the Toyota GT86, its Subaru BRZ sister car and the North American-only Scion FR-S.

Each separate level adds further upgrades to the FA20 engine platform that underpins the three sport coupes, improving the standard 197bhp output to as much as 380bhp.

It marks a new approach from the Northampton-based tuning company Cosworth, which has previously focused on supplying individual aftermarket parts, rather than developing complete packages.

Kicking off the new era is Cosworth’s Stage 1 Power Package. Combining a calibration kit and sports exhaust with a “performance filtration solution and low temperature thermostat”, this £2,000 set-up boosts the 2.0-litre four-cylinder engine 23bhp to 220bhp.

Optioning a combined overpipe front pipe, complete with spherical resonator, for an extra £700 adds a further 5bhp. On top of this, selecting the thermally coated manifold header will help reduce temperatures upfront to boost output to the 230bhp Package maximum, bring the total price up to £3,800.

“We are now able to supply completely validated solutions – as an entire system – to guarantee reliability and performance,” explained Cosworth boss Hal Reisiger.

Cosworth to release Stage 2 and 3 packages this summer

Cosworth is remaining tight-lipped about what these next Power Packages will include, although mid-range Stage 2 is expected to build on Stage 1 with supercharging technology, whereas Stage 3 is likely to feature upgrades to the engine internals.

We’ve been pining for more power in the Toyota GT86 and Subaru BRZ twins almost since they arrived on the scene. Has Cosworth supplied the answer? Tell us your thoughts in the comments section below…