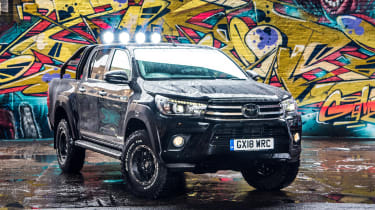 Called the Hilux Invincible 50, it’ll be on sale from November with first deliveries in Britain due before the year is out, with final prices still yet to be confirmed.

The Hilux Invincible 50 gets a handful of mechanical revisions and modifications from Icelandic off-road specialists Arctic Trucks. A new suspension system is the biggest addition, created by Arctic Trucks and Bilstein. The new setup means the Hilux rides taller, up by 40mm at the front and 20mm at the rear.

16-inch alloy wheels unique to the Hilux Invincible 50 are equipped and finished in satin black, and they’re shod in BF Goodrich all-terrain tyres. 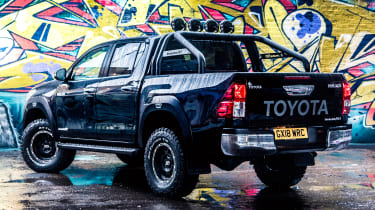 Visually, new, wider front and rear wheel arches appear and a double-hoop rollover bar is equipped in the pick-up bed, complete with four high-power LED lamp pods. Arctic Trucks mud flaps also appear, plus unique Invincible 50 badging and detailing inside and out and a classic style Toyota graphic on the tailgate. All examples are finished in gloss black.

Spec wise, features are lifted from the standard Hilux Invincible. Power is provided by a 148bhp 2.4-litre turbodiesel four-cylinder engine, which sends drive to the all-wheel-drive system through a six-speed automatic gearbox.

Read our in-depth review of the Toyota Hilux here.

The Toyota Hilux is as rugged and reliable as ever, but comes impressively equipped, too
Facelifted Toyota Hilux unveiled with new 201bhp diesel 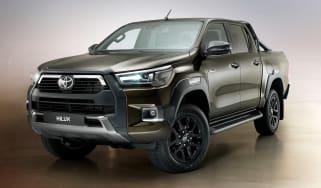 An updated version of the Toyota Hilux pick-up truck has been revealed, with a larger 2.8-litre diesel engine and an improved infotainment system
Toyota Hilux vs Mitsubishi L200