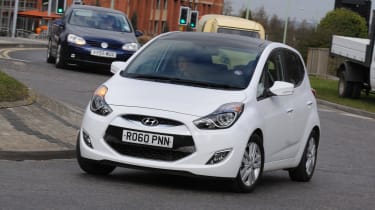 There have been lots of cars over the years that have failed to register with potential buyers; models have come and gone with few people even noticing. The Hyundai ix20 is just such a car, but its low profile isn’t a reflection of this micro-MPV’s abilities.

We were so impressed that we gave it our Best Supermini award in 2011, saying: “Not only does this practical model look great, but it brings new levels of cabin quality and comfort to the supermini-MPV sector. Choose the ix20 and you also get the security of buying a car from one of the most highly regarded dealer networks in the country.” The ix20 has proved to be reliable and excellent value, so while the Hyundai doesn’t excite, it can still make a great used buy.

Once, MPVs were the future. It started in the eighties with generously proportioned, seven-seat, multi-purpose vehicles gaining popularity, and by the early noughties an array of smaller models arrived, squeezing seven seats into a more compact space. But it didn’t stop there, because a stack of high-roofed five-seat MPVs appeared.

These didn’t offer any more seats than a regular family car, but had features such as rear seats that could be arranged in different ways, freeing up space and improving carrying capacity. The Hyundai ix20 was just such a car; it had the same footprint as a Ford Fiesta, but came with a stack more practicality and versatility – and now you can buy one for as little as £3,000.

Although the ix20 was on sale for the best part of a decade, it was a model range that saw very little in the way of evolution.

Hyundai launched the ix20 in November 2010 with a choice of 89bhp 1.4 or 124bhp 1.6-litre petrol engines, or there was an 89bhp 1.4 CRDi diesel; a 114bhp 1.6 CRDi arrived soon after. The diesel engines only came with a six-speed manual gearbox, while the smaller petrol engine was only available  with a five-speed manual; the bigger petrol unit came only in four-speed auto form. 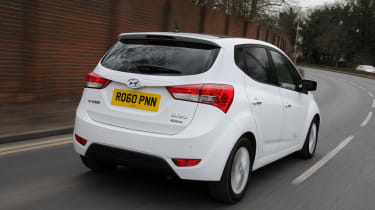 A facelifted ix20 arrived in spring 2015 with refreshed styling, and a new six-speed automatic transmission to improve fuel economy. This was still offered only with the 1.6-litre petrol engine but, unlike before, that powerplant now came with the option of a six-speed manual gearbox.

The diesel engines offer excellent fuel economy with strong performance and decent refinement, but if you’re a low-mileage driver a petrol-engined ix20 will make more sense. The 1.4-litre petrol engine is fine if you’re in no hurry, but the 1.6-litre unit is a better bet if you do a fair bit of motorway driving. 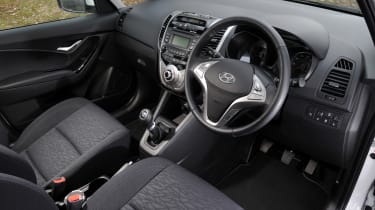 Range-topping Style cars have electrically folding door mirrors, an opening panoramic sunroof and privacy glass. From spring 2015 only SE and Premium were offered, which were equivalent to the previous Active and Style.

The Venga was Kia’s equivalent to the ix20, and under the skin the two cars are much the same. The ix20 is more comfortable and better equipped, but the Venga is just as spacious. The Nissan Note is another worthy contender with its cleverly packaged cabin, decent dynamics and frugal engines.

The second-generation Vauxhall Meriva (from 2010) has rear-hinged back doors that make access easy. It’s versatile and the cabin feels more upmarket than the ix20’s. While the Vauxhall was significantly more costly when new, on the used market it’s reasonable value, and plentiful.

The Ford B-Max is also worth considering, with its neat sliding door arrangement, while the Citroen C3 Picasso and Fiat 500L offer good value in terms of space versus cost.

All facelifted ix20s (from spring 2015 onwards) came with engines that complied with the Euro 6 emissions regulations.

The most common gripe owners have concerns an erratic Bluetooth connection, where the system disconnects from the phone mid-call.

Buy one of the most recent Hyundai ix20s registered and it should come with more than three years’ worth of the original warranty left on it.

Practicality is the primary focus of the ix20’s cabin, rather than outright luxury and fancy styling. As such, some of the plastics look and feel rather cheap, but in spite of this, the design is generally appealing, and the build quality is pretty good.

The seats could do with more support if we’re being picky, but even entry-level ix20s come with height adjustment for the driver’s chair, which is a bonus. The high roof means headroom is good, while the sliding rear seats ensure decent legroom for passengers in the back. Boot capacity is excellent, at 440 litres with the rear seats upright, or 1,486 litres with them folded down.

Whichever engine is fitted to your ix20, it will need to visit the garage every 12 months or 10,000 miles. Services alternate between minor and major, which are priced at £132 and around £250 respectively. While the minor check-up is in effect an oil change and inspection, the major service cost varies, because different numbers of parts have to be replaced at different mileages.

The big service is every six years or 60,000 miles, and this is pegged at £411, but once an ix20 reaches its third birthday it’s eligible for cut-price maintenance. Known as the Essentials service, there are three levels: Base, Interim and Full, priced at £99, £169 and £229 respectively, which includes 12 months’ complimentary breakdown cover. All ix20 engines are chain-driven, so there are no cambelts to replace.

Despite the ix20’s long lifespan, it has only been recalled on one occasion, which is a pretty impressive achievement. That single campaign was launched in October 2012 and affected 5,843 manual ix20s built between October 2010 and April 2012.

The manual gearbox wasn’t the reason for the recall, but it was something that made all of the difference from a safety point of view. The problem centred on the rear brake calipers, which could corrode, leading to the handbrake failing to hold. In theory this could also affect ix20s with an automatic transmission, but the fact that these have a Park setting to hold the wheels made things less of a problem, hence they were not included in the recall. Either way, the solution to this issue was to clean the calipers, and then fit new seals.