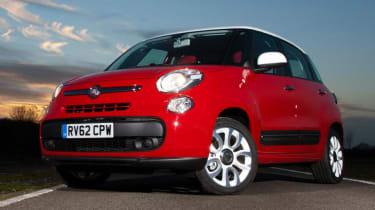 The 500L offers much of the funkiness of its smaller sibling, if not all of the cuteness. But a poor Driver Power rating suggests that it isn’t the most accomplished used buy. The 500L could be personalised extensively, so establish exactly what you’re getting for your money. Some of the extras worth seeking out include a heated windscreen, leather trim and a rear parking camera. We’re less convinced about the need for a Lavazza built-in coffee machine, which was available as a £200 extra.

Fiat has been building cars for 120 years, and it’s fair to say its biggest hits have generally been its smallest models. Cars such as the original 500, the 126, Uno, Panda and the more recent 500 launched in 2008 have all been big successes for the Italian brand.

Indeed, Fiat is so dependent on the 500 for its livelihood that, if this car and its derivatives disappeared, Fiat would barely exist in the UK. The regular three-door 500 hatch accounts for the lion’s share of Fiat’s UK sales, but its bigger (and more unusual) brother, the 500L, offers a far greater level of practicality for those who need a family-friendly carry-all, but don’t have a huge amount of money to spend. 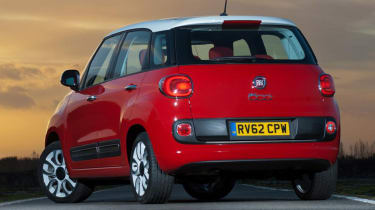 The 500L arrived in March 2013. Buyers could choose between Pop Star, Easy and Lounge trims, and four engines: two petrols (875cc TwinAir, non-turbo 1.4) and two diesels (1.3 or 1.6-litre MultiJet units). Only the smaller diesel engine was offered with an auto transmission (a five-speeder called Dualogic). Otherwise, a six-speed manual gearbox was standard, apart from with the 1.3 MultiJet, which had a five-speed box.

The naturally aspirated 1.4-litre petrol engine feels the weakest, with the lack of a turbo making progress slow. As a result it’s the only motor we’d avoid, but the 1.6-litre diesel is usefully more zippy than the 1.3, so if you do lots of long journeys we’d go for the bigger unit. That’s unless you must have an auto, which came only with the 1.3, but the manual is nicer. 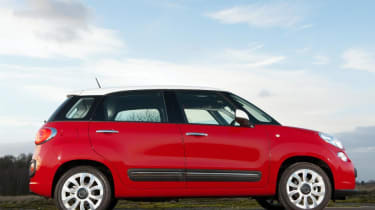 Alternatives to the Fiat 500L

The five-seat 500L is pitched against small cars such as the Honda Jazz, Kia Venga, Vauxhall Meriva and Hyundai ix20. Of these, the Honda is the most enticing, with its ultra-practical interior and excellent reliability, but it’s feeling dated and the model range is limited. The Vauxhall has only five seats but you get plenty for your money; the cabin is spacious and the rear-hinged back doors provide unrivalled access to the back seats.

The Kia and Hyundai aren’t very inspiring but they are dependable, good value, and unusual. You could also consider the Ford B-Max and Citroen C3 Picasso, but if you’re thinking about buying the seven-seat 500L MPW, it’s worth looking at a Renault Grand Scenic or Vauxhall Zafira as well.

All 500Ls come with a space-saver spare wheel in the boot, unless the Beats audio system upgrade has been specified.

The Trekking version sits slightly higher than other 500Ls, and has a number of electronic aids designed to improve its traction.

The Trekking also is the only model in the range to come with autonomous emergency braking as a standard feature, rather than an extra.

The integrated traffic information for the sat-nav system doesn’t work very well. In fact, it doesn’t work at all in some cases.

The 500L’s interior feels as though it’s been built down to a price, but Fiat has compensated for this (to a point) with a generally user-friendly design. With reach and height adjustment for the steering wheel, plus height adjustment for the driver’s seat, it’s easy to get comfortable. There’s also good space in the rear (the back seats slide back and forth) and boot space is decent, at 343-1,310 litres. 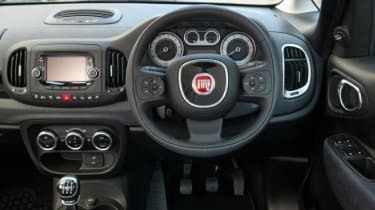 The 1.4-litre petrol and 1.6-litre diesel engines have a cambelt that needs to be replaced every six years; Fiat dealers charge a very reasonable £259 to do this, while fresh brake fluid is required every two years, at £59.

The 500L has been recalled twice so far, first in January 2014 because 271 cars built between February and April 2013 were fitted with a faulty fuel pump bracket. This could damage the fuel pipe in a crash, leading to leaks, and even a fire. The second recall, in December 2017, affected 17,329 500Ls made before September 2017. This was for a possible short circuit.

The 500L scraped into this year’s Driver Power used car survey, in 96th place out of 100, and feedback was pretty poor, although running costs were rated quite well. Owner reviews from our sister title Carbuyer paint a picture of a characterful, spacious car that’s easy to manoeuvre, although a couple of reliability issues rear their heads, and the automatic gearbox is criticised.