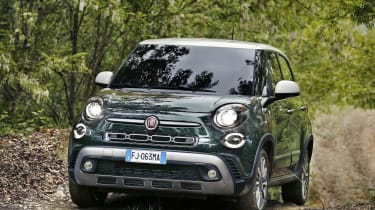 If you weren’t a fan of the retro Fiat 500L before, these subtle tweaks for 2017 will do little to change your mind. It’s a distinctive, practical alternative to more mainstream mini MPVs and has a desirability factor that many rivals lack. But the driving experience is a mixed bag, and we find it tricky to recommend this petrol Cross model, too. If you want the SUV looks then Fiat’s very own 500X makes more sense, while the punchy diesel is nicer to drive.

With the fashionable Fiat 500X selling in its droves and the ever-popular 500 continuing apace, the 500L – unchanged since 2013 – has been looking a bit neglected. It’s unloved no more, though, because the retro-styled mini-MPV has finally received a selection of mid-life nips and tucks, with the aim of bringing it into line with the rest of the 500 family.

Fiat is says that 40 per cent of the 500L’s components have been revised for the facelift, but as is often the case, you’d have a hard time squaring that claim just by looking at it. Exterior tweaks to the love-it-or-hate-it design require pointing out, in fact, with some extra chrome at the front, new LED daytime running lights, re-profiled grilles and bumpers and a selection new colours. The 500L’s variant range has been changed, too, with Urban, Cross and Wagon models replacing the standard, Trekking and the MPW models respectively.

We’re driving the Cross – a name Fiat’s brought in to enhance its ‘crossover’ image. It benefits from rugged skid plate-style bumpers, side protectors and a 25mm increase in ride height. Inside, the only giveaway is tucked away beneath the climate control switches; there’s a new three-mode drive selector that optimises front-end traction for low-grip terrain. You can also activate hill descent control, or as Fiat optimistically calls it, “Gravity Control”, with the rotary dial. 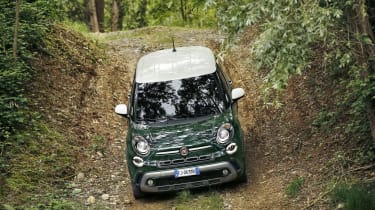 Elsewhere, Fiat has updated the cabin materials and tweaked the centre console design; raising the gearlever slightly and replacing the awkward aircraft-style handbrake with a more conventional one. There are new instruments, with two speedo and rev counter pods separated by a new TFT screen, and white switch backlighting. New finishes on the doors and dash boost perceived quality, making it a reasonably tactile environment with a decent array of soft-touch plastics. Minor details like the hollow indicator stalks let things down a bit, however.

Still, standard kit includes a panoramic roof, climate control, DAB radio and ambient lighting, although autonomous braking is on the options list. As pricing for the 500L is expected to remain broadly similar to before, our car will cost around £20,000 when it arrives in the UK. We’d expect such safety kit to be standard fitment here, too.

The biggest news, though, is the addition of the brand’s latest UConnect Live HD system: a seven-inch touchscreen sat-nav that incorporates Android Auto and Apple CarPlay connectivity. The bright and clear screen is considerably less fiddly to operate than the old five-inch system, but it lags when switching between menus.

Storage is excellent, with large door bins, a central armrest cubby and two gloveboxes. There’s also ample legroom and up to 455-litres of boot space thanks to the sliding rear bench, although headroom was a bit tight due to the glass roof.

Despite the visual changes, Fiat didn’t feel any need to tweak the engine range or the suspension, so for all intents and purposes the 500L drives just as it did before. Our 1.4-litre T-Jet model’s modest 118bhp generates adequate pace and sounds rorty enough, but its lack of torque showed on the steep hills around Turin. It’s fine for the school run and remains a top choice for town driving, but anyone looking for a confident and punchy feel (plus better economy) on longer trips would be better off with the 1.6-litre diesel. 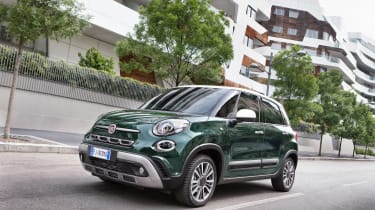 The increased ride height of the Cross allowed it to navigate a rutted gravel track with ease, but the lack of four-wheel drive means you won’t be attempting much more. The suspension is soft, which translates to a comfortable ride, although expansion joints and sudden bumps jolt through the cabin more than in a Ford B-Max or Vauxhall Crossland X. The 500L isn’t a very engaging drive, either, with plenty of body roll, light steering and an obstructive manual shift.