The Fiat 500L is the newest addition to the 500 family, claiming to offer a mix of style and practicality 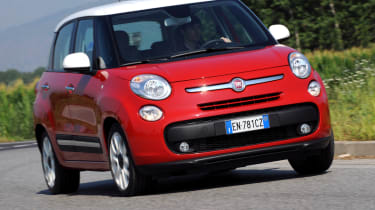 The 500L will be perfect for people who’ve outgrown a 500 or decided not to buy one as it couldn’t accommodate their families. It combines the same retro-inspired styling and light, easy drive with a dose of practicality. But as these buyers will be on the open road more than 500 owners, the car really needs to be better to drive.

If you think a MINI should always be mini, then you’ll probably agree that a Fiat 500 should always be a tiny city car. But families wanting a MINI are catered for by the Countryman, and now the same families can opt for the Fiat 500L – a jacked- up MPV version of the 500.

It rides on a platform derived from the Punto and is 414cm long – that’s around 59cm longer than the standard 500. All that extra room means space for five tall adults inside, plus a 400-litre boot for lots of bags.

Despite the huge difference in size between the 500 and 500L, Fiat has tried to retain the 500’s cute looks. Twin round headlights are the most recognisable feature, mounted either side of the single-bar grille. But a few changes have been made for practicality’s sake, including the near-360-degree glass that improves visibility.

With the bigger footprint and more weighty construction comes a range of more powerful engines than in the 500. The line-up kicks off with a 93bhp 1.4-litre petrol and is topped by a new version of the two-cylinder TwinAir engine producing 104bhp, rather than 84bhp in the smaller 500.

We drove the sole diesel – a 1.3-litre Multijet with 84bhp – and while the 0-62mph time of 14.9 seconds sounds slow, this engine suits the 500L in town. But it struggles on faster roads and the TwinAir will have more character, is much quicker and almost as efficient, if you can afford it. Our diesel model is only slightly more frugal at 68.9mpg, versus the TwinAir’s 58.8mpg.

The appeal of the 500 is its ability to nip around town, thanks to its compact footprint and light controls. Pulling off the same trick in a larger, heavier car was always going to be difficult and Fiat hasn’t quite managed it.

The controls are just as light, but the 500L feels unwieldy and slow. Still, great all-round visibility makes finding gaps in traffic easy.

Along a twisting back road, the 500L can’t match up to the Countryman. The light steering that works so well in town is short on feel and a bit imprecise, while the soft ride that does such a fine job of smoothing out roads at low speeds gives the car a wallowy feel in high-speed bends.

But practicality is the 500L’s forte, and Fiat has worked hard to ensure the car is family friendly. The boot is adjustable on three levels, while the rear seats all slide back and forth, and split-fold 60:40, too. Owners will also be able to fold down the front passenger seat and there are 22 different storage spaces dotted throughout the car.

Plus, while the hard plastics covering the dashboard prove that material quality isn’t as high as in the Countryman, the fit and finish is particularly good and the chunky switchgear feels bulletproof. In a market normally dominated by cars like the Citroen C3 Picasso, the 500L stands out because it boasts the kind of style most small MPVs can only dream of. It’s also impressively comfortable and practical – and with an expected price tag of £15,000, it’s good value, too. However, it’s by no means the best driver’s car in this class.