We give our verdict on the Vauxhall Astra VXR, the most powerful hot hatch you can buy 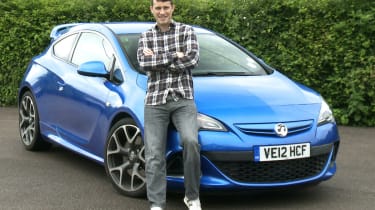 The new Vauxhall Astra VXR is the most powerful front-wheel-drive hot hatch currently on sale. Under the bonnet is a 2.0-litre turbo with 276bhp that’s good for 0-62mph in just 5.9 seconds.

The VXR is based on beautiful Astra GTC which is a very good starting point. However, Vauxhall has beefed it up with a muscular bodykit, huge alloy wheels and a rear spoiler. Go for the optional aero kit and you get two rear spoilers.

Inside there’s the familiar Astra dash, only it’s highlighted with some VXR badging and racier dials, while there’s also a sporty gearknob and some new pedals. The biggest change, however, are the low-slung yet comfy VXR sports seats.

Hot hatches are supposed to provide fun in a practical package, and in this respect the VXR can’t be beaten. It has a huge boot, there’s plenty of in car storage, and space in the back is better than some family cars.Even though the Astra VXR looks as unyielding as cement, you really can live with it everyday, because when you have it in normal mode, the standard-fit adaptive suspension just about copes with bumps in the road.

However, when you press the VXR button on the dash, the suspension stiffens right up, the throttle response is sharpened and the steering gets weightier. Speaking of which, driving enthusiasts will be pleased that unlike the normal Astra GTC, which has electric power assistance, the VXR uses a good old-fashioned hydraulic system.

The Astra VXR also comes with a mechanical limited-slip differential as standard, which effectively locks the front wheels together under acceleration for improved traction. In fact there is so much grip – more than any other car in this class – that you actually drive slightly differently than a normal hot hatch. Normally if you go into a corner too hot you lift off the throttle slightly to tighten the nose. However, in the VXR do the exact opposite – because rather than understeering when you apply more power, the locking diff seemingly digs the front tyres harder into the tarmac, and a bit like a cat on carpet, the car just somehow claws its way round.

On the flipside, the Vauxhall isn’t as playful as the super adjustable Renaultsport Megane Cup. And for all its power, the engine isn't as good as the one in the VW Scirocco R. It’s a bit laggy until the turbo comes on boost, and it doesn’t really make that good a noise – despite the massive exhaust.

The biggest problem with the car though, is that you get the feeling it has been set up as a trackday weapon, rather than a back-road blaster, because it can feel a little unruly if the road is anything less smooth than a baby’s bottom. Despite the fact Vauxhall has fitted its torque steer - reducing HiPerStrut front suspension, the wheel does still squirm in your hands under acceleration if the road surface is uneven, and it seems to follow every track in the road. It’s nowhere near as bad as the old Astra VXR, but on a British B-road this Vauxhall is not as composed as a Focus ST.

But hey, maybe you want your hot hatch to be a little bit on the wild side, or maybe you just want the most powerful car in its class... Either way the Vauxhall Astra VXR is a car which demands respect.