Pictures and details of the facelifted Vauxhall Insignia, which gets price cuts and a new tax-friendly 99g/km model 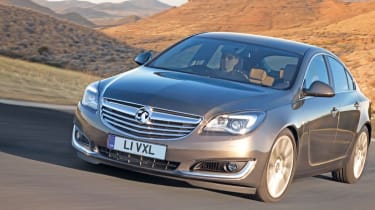 This is the facelifted Vauxhall Insigina and while you might struggle to spot the differences from the outside, but you’ll certainly notice the new prices. And when you open the door there’s a big difference inside, too.

When the new car arrives in October, most models will cost thousands less than their equivalent predecessors, with the £16,279 entry-level car priced £1,771 lower than before.

Running costs have been slashed, too. The arrival of two diesels emitting only 99g/km of CO2 is big news for company car users. As our table shows, they’ll bring lower tax bills and claimed average economy of 76.3mpg will also reduce fuel bills.

The confusing plethora of buttons and knobs inside the car has been replaced with a cleaner look and optional (£350) eight-inch touchscreen system that can use apps downloaded to your phone.

A new customisable eight-inch display in the instrument binnacle can also be added, although every model gets revised dials. Better-quality materials, new colour schemes and a new steering wheel complete the interior picture.

The Insignia has never been the finest-riding car in its class, so chassis tweaks are aimed at boosting comfort and fun. The electric power-steering has been reprogrammed for greater feel, while levels of refinement are said to have been improved, too.

The Insignia has always looked great, though, so exterior tweaks are limited. There’s a bigger front grille with repositioned Griffin badge, smoother bumpers and extended tail-lamps, as on the Cascada convertible (tested on Page 82). All models also get LED daytime running lights.