Facelifted Vauxhall Zafira Tourer MPV to get Astra-inspired look, will arrive in October 2016 and start from £18,615 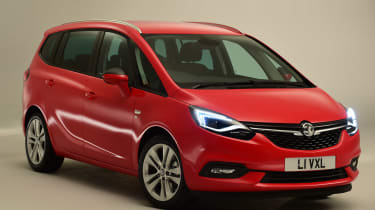 The new Vauxhall Zafira Tourer has already been revealed with prices and specs, but now we've had the chance to get up close to the new car. The on-the-road starting price is £18,615, which secures you the entry level Design trim with a 138bhp 1.4-litre turbo petrol engine and a manual gearbox. The new seven-seat MPV will arrive in showrooms in October.

We spoke to product manager for Zafira Tourer Sean Freeman about the updated model. He told us that the brand sees the cars as a premium MPV, and the new design helps emphasise that. "The front end redesign gives it a wider stance on the road, and it looks lower. That helps give it that premium look that cutomsers are after," he told us, adding that the focus for the car is "premium flexibility" - meaning that it's also still useful as a people carrier.

All Zafira Tourer models are equipped with Vauxhall's seven-inch IntelliLink infotainment system with Android Auto and Apple CarPlay, the brand's OnStar connected car services, front and rear parking sensors and 17-inch alloys. The range rises through to Elite Nav spec where, starting from £25,445, you're treated to kit like sat-nav, front heated leather sports seats, climate control and a panoramic sunroof. 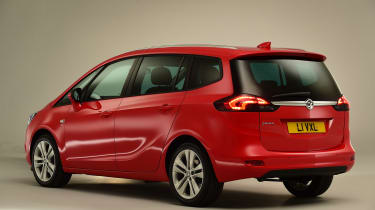 We had a look around a mid-spec Tech Line model, which also featured what Vauxhall calls lounge seating in the back. The middle seat can be turneed into an armrest, and the other two seats are moved back to create more space. There's loads of headroom and legroom in the back as a result, although the sixth and seventh seats in the boot are small.

Only two engines are available - the aforementioned 1.4-litre turbo petrol engine, and a 168bhp 2.0-litre diesel. Both can be had with either a manual or an automatic gearbox. However, Vauxhall has confirmed that a 1.6-litre diesel with 132bhp is on the way, which is likely to have the highest fuel economy figure - and it'll be a big seller in Britain, sitting in between the two engines available at launch. There are no details on pricing or economy yet, though.

At the front, the MPV gets new headlamps with Vauxhall's double wing daytime running lights. There's an updated grille, plus more muscular wheelarches. It looks wider, squatter and more like the new Astra than before. At the rear, there are no changes - but product manager Freeman tells us the new front-end look is the key change, to keep it in line with the rest of the family. "We're selling the brand as well as the car," he said. "People might love the look of the car on the road, but not need something so big. So they might head to a dealer and realise the Mokka is the car for them."

Vauxhall vice president of European design Mark Adams also said: "The front of the new Zafira Tourer takes the characteristics of the award-winning Astra, and anchors it in Vauxhall's new portfolio. This is also reflected in the interior by a redesigned instrument panel and dash. It's purer, clearer and easier to use." 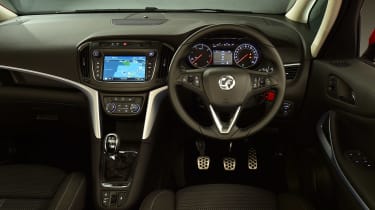 That's where the biggest changes occur. There's a new dash with a neat integrated screen replacing the old top-mounted system. It loses the plethora of buttons, too, cleaning up the facia to make it easier to use on the move. The Tourer's new IntelliLink infotainment system can be seen, and you can even have a 4G WiFi hotspot thanks to the OnStar connectivity and concierge service.

The facelifted Zafira Tourer retains the outgoing car's Flex7 seating, plus practical solutions like the Flex-Fix bicycle carrier and FlexRide adaptive damping. As before, the boot has 710-litre capacity with the third row of seats folded flat. That can expand to 1,860 litres with the second row folded, too - trumping the Citroen Grand C4 Picasso, which has 537 and 1,851 litres respectively. The new Zafira Tourer will start at £18,615 and customer cars will be on the road in October this year.

What do you think of the new Vauxhall Zafira Tourer? Let us know below...