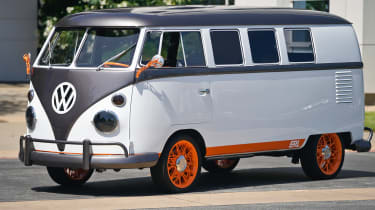 Volkswagen’s Electronics Research Laboratory celebrates its 20th anniversary this year and to mark the occasion it has built an electric concept of the classic Kombi van. Called the Type 20, it’s based on a 1962 Type 2 eleven-window Microbus and features a range of experimental technology and trim.

The Volkswagen Type 20 concept is powered by a rear-mounted electric motor, which produces 120bhp and 235Nm of torque, that is driven by a 10kWh battery pack. That’s more than twice the power of the van’s original flat-four air-cooled engine. To cope with the extra grunt, it also features a custom active suspension system, co-developed with Porsche.

Volkswagen has also finished the Type 20 with a custom paint-job, a retrimmed interior and a set of unique headlights. As part of the concept’s debut, Volkswagen also announced it wll rename its Electronics Research Laboratory the “Innovation and Engineering Centre California,” which will work on projects for future VW Group models.

What do you think of this all-electric take on a classic van? Let us know your thoughts in the comments section below…