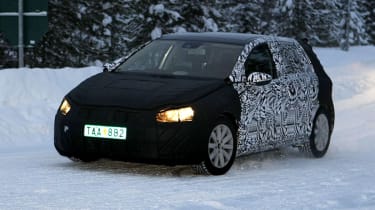 The new VW Golf MkVII will be lighter, safer and better to drive than ever. And as these latest spy shots show, it's deep into development ahead of its world debut at the Paris Motor Show in October.

The Golf MkVII will sit on the VW Group's brand new modular MQB platform, which will underpin all medium-sized models in the future - including the new Audi A3, SEAT Leon and the 2013 Audi TT.

By using thinner-section but stronger steel in its construction, the new Golf will be 45kg lighter, whilst the body gets longer and wider to conform to current safety regulations.

All this gives the new model a larger, more aggressive look. Expect the overall design to be evolutionary, though, with sharper creases in the bodywork and slimmer headlights.

The reduced weight will help to improve emissions and economy, as will a host of new three and four-cylinder petrol and diesel engines - the highlight of which will be a 1.4 TFSI with cylinder deactivation technology.

A plug-in hybrid and a fully electric model have also been confirmed, while a GTI and range-topping 300bhp four-wheel-drive R model will complete the line-up. Buyers will be given the choice of six-speed manual and seven-speed DSG dual-clutch automatic gearboxes, as in the current Golf.

The medium-sized family car will continue to be sold as a three and five-door hatch – with an estate and convertible penned in for the future. The MkVII will also gain equipment normally reserved for more upmarket models - including adaptive cruise control and a number of electronic safety aids. When it goes on sale in early 2013, expect to pay slightly more than the current car, which starts at £15,865.