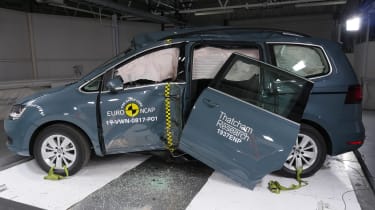 The Volkswagen Sharan has received four stars out of five in its Euro NCAP crash test, despite its rear passenger door detaching during impact assessments.

NCAP’s side pole impact test is the organisation’s toughest assessment, and sees a car propelled at 20mph into a 25cm-diameter pole designed to mimic a tree or telegraph post. NCAP says the types of collisions this simulates “are severe and the frequency of death or serious injury is high.”

During the Sharan’s side pole assessment, the rear nearside passenger door almost entirely detached from the car’s body, presenting a “risk of occupant ejection”, according to assessors. Despite this, the Sharan was awarded four stars overall, meaning it was judged to offer “overall good performance in crash protection”. The Sharan was rated 89 per cent for the protection if provides adult occupants, and 78 per cent for child occupant protection.

Euro NCAP periodically retests models that have been on the market for some time, with increasingly stringent crash tests meaning the loss of one star or a handful of percentage points is not unusual. The Sharan was originally tested in 2010 and scored five stars, with a 96 per cent adult occupant rating and an 80 per cent child occupant score; no mention was made at the time of issues with its doors.

But while the side-impact pole assessment has been part of the NCAP test routine since 2001, it was toughened up in 2015 - before the Sharan was first tested. The upgraded assessment now sees a car fired at the pole at a 15-degree angle, rather than being perpendicular, which may explain the door’s recent detachment.

Commenting on the Sharan’s performance, Euro NCAP board member Matthew Avery: “Although the Volkswagen Sharan is an older design, families will still choose it. A structural failure of this magnitude in impact testing is disappointing,”

The latest round of NCAP tests also saw the Tesla Model X and Porsche Taycan EVs awarded five stars, with the Model X praised as "one of the safest cars of the year", partly thanks to its 94% safety assist score - though Avery warned that Tesla’s “tendency to overstate the autonomous capability of its driver support systems remains a concern.”

Explaining the decision to award the Sharan four stars despite the door detatchment, Avery said: "The pole crash is the most structurally invasive of all Euro NCAP crash test assessments. In the test, the Volkswagen Sharan showed a high level of protection for the occupants and the restraint systems are well-designed to prevent injuries. Witness the majority green areas on the dummy.

"However, the instability of the side-door was of concern and resulted in points being deducted. This reflects the fact that although the overall performance of the vehicle was not compromised, there could be, in extreme circumstances, a risk of ejection. Although the detachment of the door appears dramatic, the dummy injury values – the most critical part of the assessment – indicate that the vehicle offers high levels of passive safety protection.

"Euro NCAP is constantly challenging carmakers to improve levels of passive and active safety and the threshold for a five-star Euro NCAP rating becomes more exacting on an annual basis. Ultimately, we want carmakers to manufacture, and drivers to purchase, five-star cars."

A statement from Volkswagen said: “During the Euro NCAP side-pole test, the rear sliding-door of the impacted vehicle-side detached from the car after impact, as the vehicle moved away from the pole. This door behaviour has not previously been seen on a Volkswagen Sharan or any other Volkswagen model. Right now we are in contact with Euro NCAP in order to find the root cause for this behaviour. We are not aware of incidences of detached sliding doors through any real-world accident research database."

Volkswagen also points out that the current NCAP tests are more stringent than they were when the Sharan was awarded a 5-star rating in 2010 but that since that result it has upgraded the MPV's safety levels. A multi-collision brake system was included as standard in 2017 and seat belt reminders for all seven seats have also been added.”

What do you make of the Volkswagen Sharan scoring four stars? Let us know in the comments below...