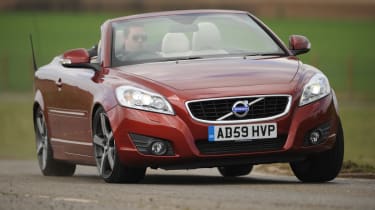 The original Volvo C70 of the late nineties was offered as a coupe and a traditional fabric topped convertible, but the current model has a retractable hard top. Revised in 2009, the front-end styling was updated with Volvo’s sharp new face and looks much better for it. The three-piece hardtop roof mechanism takes nearly half a minute to fold, but once stowed the C70 is a full four-seat cabriolet. It's more expensive than mainstream rivals like the Peugeot 308 CC and Volkswagen Eos, and is an alternative to premium cars like the BMW 3 Series Convertible and Audi A5 Cabriolet.

Diesel engines dominate the Volvo C70 range - the only petrol being the 227bhp 2.5-litre T5 found in the range topping SE Lux. The 2.0-litre diesel is available in either 148bhp D3 or 175bhp D4 states of tune, with a manual or auto gearbox. The C70 is no sports car, though, as is ponderous around corners - it's far better suited to relaxed cruising, and here the diesels come into their own. Models with smaller wheels ride better, but wind noise from the tops of the A-pillars upsets refinement.

The Volvo C70 is priced to reflect the maker's premium status, so consider the Audi A5 Cabriolet and Saab 9-3 Convertible as its key rivals. Like other Volvo models there’s the option to sign up for fixed priced servicing deals that manage running costs. Both outputs of diesel engine emit 154g/km and have an identical combined economy, but the T5 petrol is very thirsty. Volvo hasn’t introduced its DRIVe technology into the C70 so the coupe/cabriolet is one of the most expensive cars in their range to run. Residuals across the models are between 35 and 40 per cent.

In common with most coupes/cabriolets, the Volvo C70 has a slightly bulky rear end and the windscreen extends a long way back towards the front seats. With the roof stowed the car looks a bit square in profile, while in coupe guise the roofline is a little bulbous. Its best angle is from the front, where the swept-back lights and smart grille look great. There’s a choice of ES, SE and SE Lux trims, although Volvo does offer special editions with extra kit. The cabin is defined by the elegant sweep of metal that forms the floating centre console, and higher trims get plenty of upmarket equipment.

With an excellent driving position and plush seats, the Volvo C70 majors on comfort. Unlike lots of cabriolets it has plenty of space for rear passengers, while the roof mechanism folds neatly into the boot and offers an electrical tilt function so luggage can still be accessed. With the roof down luggage capacity is 200 litres, while driving with it up increases boot space to 404 litres. Inside, side pockets and a binnacle running from front to rear provide the cabin stowage. A windbreak to reduce buffeting is optional across the range but standard on the Solstice special edition.

As you’d expect from Volvo, the Swedish manufacturer has ensured their convertible model has all the safety and body integrity of mainstream models. The C70 features a roll over protection system that has two pyrotechnically charged roll hoops hidden behind the rear seats that deploy under roll-over conditions, whether the roof is retracted or not. Stability control is standard fit and there’s a full compliment of airbags across all models. Only the entry-level ES does without rear parking sensors, but all models have tyre sealant rather than a spare wheel. Volvo recorded an overall top 10 finish in our 2011 Driver Power survey. 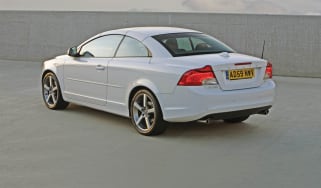 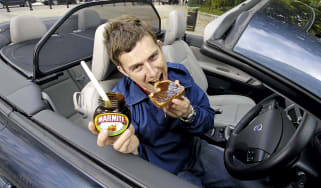 After nearly 18 months on the long-term fleet, our C70 has finally gone back to Volvo.
Volvo C70 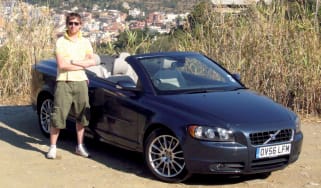 A road trip to Barcelona gave our Volvo C70 a chance to stretch its legs. But how practical, comfortable and frugal is a coupé-cabrio over such a dist…
Volvo C70 (2007) - long-term test 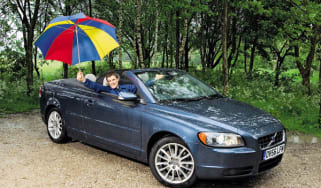 A faulty roof has seen it out of action for a few weeks, but now our long-term Volvo C70 is ready for some summer sun
Volvo C70 D5 SE 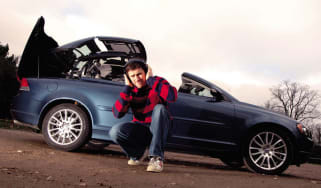 Our Volvo C70 is great to drive, but we're having to go to extreme lengths to drown a tapping noise
Volvo C70 (2006) review 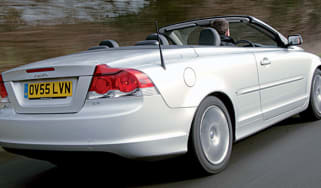 Big engines, top trim levels and toys are nice to have, but do you always need to spend a fortune to get the best car in the line-up?
Volvo C70 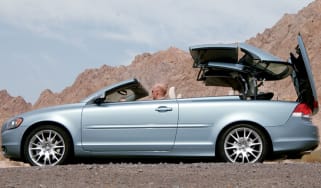 Here's the proof that Volvo's expertise on safety has finally been matched with style!
Volvo C70 (2004) review 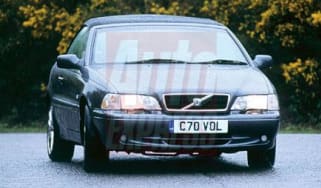 If there was an anti-ageing cream for cars, Volvo would be the leading supplier.
Skip to HeaderSkip to Content