The Saab 9-3 Convertible is shown up by cheaper, newer rivals. 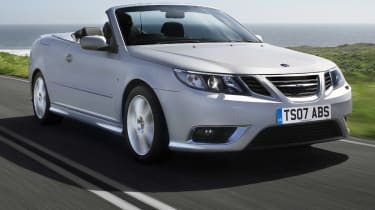 Driving Saab revised the 9-3’s chassis in 2007, meaning there’s less body shake than before – although it’s still not nearly as robust as newer rivals. There remains a slight tendency for the front wheels to follow cambers and ruts, while on wet roads the traction control light flickers frequently. Sure, on smooth, flowing roads the 9-3 is pleasant enough to drive. But it’s a long way from sporting and doesn’t offer the composure or involvement of better competitors. The turbocharged petrol and diesel engines are powerful, though even here, a slightly notchy gearshift and awkward, long-travel clutch blot the copybook.

Marketplace The Saab has a prestigious image, but appears a bit old-fashioned with the roof up. It’s far more successful with the fabric hood lowered. The Swede’s elegant, flowing side profile makes it clear that it was designed as a model in its own right. A minor facelift in 2007 brought revised headlamps and a cleaned-up side profile. There are six engines and three trim lines – Linear SE, Vector Sport and performance-focused Aero. Rivals include the Audi A4 Cabriolet, BMW 3-Series Convertible, Volvo C70 and cheaper alternatives such as the Volkswagen Eos and Vauxhall Astra TwinTop.

Owning The Saab’s triple-layer hood lowers rapidly, in just 23.5 seconds – and does so at speeds of up to 20mph. The cabin is a little noisy with it down, but it’s free from excessive bluster and holds the heat in well. It’s spacious for four people too, although the plastics aren’t premium-standard. Overall fit and finish is not what it should be, though we like quirky touches such as the ignition key mounted on the transmission tunnel. Alas, running costs are high, and retained values are unimpressive, at around 46 per cent. Rivals can add well over 10 per cent to this figure. 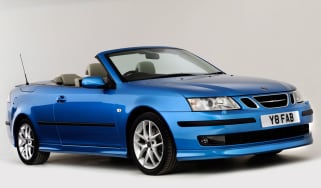 The used Saab 9-3 Convertible is great value, but what should you look for?
Skip to HeaderSkip to Content