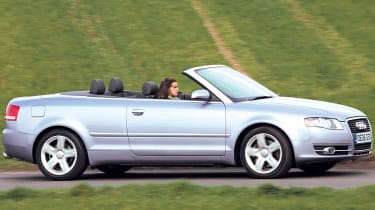 Driving The A4 Cabriolet is starting to feel its age on the road. Despite offering decent handling, the Audi's chassis can't offer the levels of rigidity found in BMW's excellent 3-Series Convertible. Over rough surfaces, you can feel shake through the body, and as a result the suspension patters over imperfections - so the A4 isn't as composed or as taut as it should be. The steering lacks sharpness, body roll is noticeable and it feels nose heavy as well. But the car's responses are never anything other than safe and predictable. There's a large engine range, including a 4.2-litre V8, but most buyers choose smaller turbocharged units, such as the 2.0-litre from the Golf GTI, and VW Group's ubiquitous 2.0-litre TDI. All are effective, though we'd recommend you give the CVT automatic a miss. Luckily, there are two other options - a manual and Audi's popular DSG semi-auto.

Marketplace The Audi has always been a front-runner in the compact executive style stakes - and the market has long responded with strong sales. There's no question the A4 is a classy-looking convertible, but thanks to an upright-looking windscreen and a saloon-based bodyshell, it doesn't look as lithe as coupe-based rivals. The brushed aluminium windscreen surround and cabin trim certainly make it stand out from the four-door, though. It competes in a sector dominated by the BMW 3-Series Convertible, though the Saab 9-3, Volvo C70 and Mercedes CLK are also key players. And if you do want a classy VW Group coupe-convertible, don't forget sister company VW's Eos, either!

Owning A well-constructed, tight fitting hood features on the Audi, though thick C-pillars mean the rear screen is small and the cabin dark. It is fully automatic though, and can be operated while moving at low speed. With it retracted, the fabric is fully hidden and the boot space is barely reduced - 315 to 246 litres. It's a practical space, while the rear seats are accommodating, though intrusive side mouldings force occupants to the middle of the bench. Up front, the driving position feels a little perched, and you notice air swirling around the cabin. You can hear wind noise around the back of the hood when it's raised, too - though Audi does offer an optional Acoustic hood that reduces this. It also has some of the best retained values of any car on sale, making this a very secure investment. Low running costs back this up.

More on A4 Cabriolet 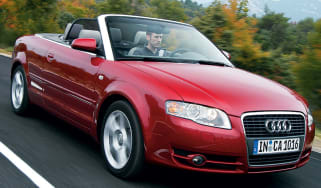 It's quicker, smarter and quieter - and that's just the new Audi A4 Cabriolet's roof! Opening or closing the elegant fabric top takes only 21 seconds,…
Skip to HeaderSkip to Content