The facelifted 2019 Audi A4 Avant estate gets a big technology boost including a mild-hybrid system. Is it enough? 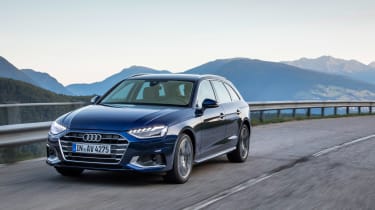 Audi has really gone to town on the latest A4, with mild-hybrid tech and improved infotainment. But while  it’s hard to deny that the updates are almost universally positive, they don’t quite provide the significant step that Jaguar has made with the revised XE, especially when it comes to the in-car tech. However, the A4 remains a pleasant, easy-going and spacious compact executive offering.

Buyers in the compact executive class have never had it so good. In the past year the Mercedes C-Class and the Jaguar XE have each upped their game with facelifts, and an all-new BMW 3 Series has elbowed its way straight to the top of the class. Now Audi has responded with a refreshed A4.

Driven here in Avant estate form, the A4 benefits from various nips and tucks intended to boost efficiency, keep the infotainment tech up to date, and give a little update to the styling. 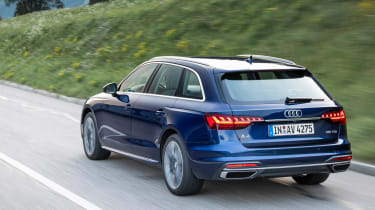 Inside, the only significant change focuses on the infotainment system. The screen on top of the dash has grown by a couple of inches to 10.1, and the old click wheel has been ditched – freeing up room for a new little cubby in the centre console – in favour of a touchscreen. Audi’s latest iteration of its Virtual Cockpit digital dials also finds its way into the new A4. The display has a higher resolution than in previous versions, while there are three different basic layouts to choose from, setting out the navigation, entertainment and driving readouts in different ways.

But have the tech revisions managed to improve things? Overall, yes, but we’re not convinced that it’s enough. The hi-res touchscreen looks great and the menus are laid out clearly. The problem revolves around the ‘touch’ part of the screen; at times, it feels quite slow to react to inputs, particularly when swiping across the mapping screen or using pinching gestures.

However, the new-for-2019 engine line-up is more responsive than ever. Each of the two petrol and two diesel models offered from launch now benefits from mild-hybrid tech. Unlike the 48-volt systems used higher up the range, the A4 makes use of a 12-volt set-up and a belt-driven alternator starter, which can recuperate up to 5kW of power when coasting. This can be redeployed to reduce load on the engine.

The 35 TDI engine driven here is a great match for the A4. With 161bhp and 380Nm to play with, performance is more than adequate, while on the move the engine grumbles away in the background without ever sounding too intrusive.

A 40 TDI sits above the 35, with an extra 26bhp and 20Nm, and adding quattro four-wheel drive. We’d save the £2,670 extra it costs; quattro brings little benefit over the front-wheel-drive version in everyday driving, and the extra weight that the system adds means that it’s more expensive to fuel and tax, without feeling much quicker. 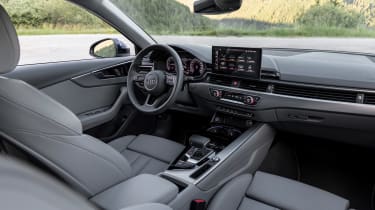 The compact executive class has plenty of options for a keen driver looking for sharp handling, but the A4 isn’t one of them. The steering is the main killjoy; even in the weightier Sport mode it’s incredibly light and, while precise enough, it has almost no feel.

Grip is fine and there’s not too much body roll, but you won’t look forward to throwing this car along a twisty road. On the plus side, the A4 is a great motorway cruiser. The cabin remains hushed at speed and, slightly firm low-speed ride aside, it keeps its occupants well cocooned.

The new mild-hybrid set-up hasn’t compromised the practicality, so rear-seat passengers are treated to one of the most spacious cabins in the class. The 495-litre boot grows to 1,495 litres with the seats folded. Both numbers are just five litres down on the new 3 Series Touring.

Elsewhere, equipment levels are more generous – offsetting likely price increases of between £1,500 and £2,000. As well as that improved infotainment system, all cars get heated front seats, electric lumbar support, LED lights and a reversing camera.

The range kicks off with the Technik trim, which then progresses through to Sport, S Line, Black Edition and the range-topping Vorsprung. The Sport, with its 18-inch alloy wheels, leather upholstery and LED interior lighting, is the sweet spot in the range.