Hot special edition version of Saab's ageing 9-3 pays tribute to rallying legend - and boasts a combination of V6 power and four-wheel drive grip, but can it compete with younger rivals? 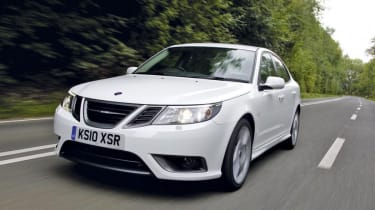 Diehard Saab fans are sure to snap up this special edition. It looks little different to lesser models, but comes loaded with kit, delivers decent straight-line pace and has a grippy chassis. And with only a handful being built, it has rarity on its side, too. Yet there’s no getting away from the fact that the 9-3 trails rivals by some distance. Its successor can’t come soon enough.

It’s said that sporting success improves the breed – and this was certainly the case for Saab. Fifty years ago, the quirky two-stroke-engined 96 scored its maiden victory on Britain’s gruelling RAC rally, instantly thrusting the Swedish company into the spotlight. And today, bosses are celebrating that anniversary with a special version of the 9-3 saloon.
The Carlsson takes its name from legendary Swedish rally ace Erik Carlsson, who secured numerous wins for Saab in the Sixties. Yet apart from a small badge on the tailgate, the latest 9-3 could easily be mistaken for lesser versions. A subtle bodykit, stylish 19-inch alloy wheels and flashes of Titanium coloured trim are the only other clues to the new car’s special status.

It’s a similar story inside, where the sole change is the addition of chunky sports seats trimmed with Saab’s premium leather finish. The rest of the cabin is starting to feel dated, while fit and finish are no match for the class leaders.
At least there’s lots of kit, with climate control, sat-nav and xenon lights as standard. The Carlsson isn’t short of power, delivering 276bhp from its 2.8-litre turbo V6. Mated to the firm’s six-speed auto and hi-tech XWD four-wheel-drive transmission, the engine propels the 9-3 from 0-60mph in only 6.9 seconds.
To cope with this pace, the Carlsson gets lowered and stiffened suspension, plus uprated brakes. There’s plenty of grip, while the XWD’s electronic limited-slip rear differential boosts traction out of corners. Sadly, none of these updates can disguise the 9-3’s advancing years. The controls lack feedback, while the auto gearbox is clunky and the ride extremely firm.
The Carlsson trails the class leaders for driving dynamics, but it does have exclusivity on its side, as the company has revealed it will build only 96 examples of this special edition. With such limited numbers, Saab should have no problem finding enough dedicated fans of the brand to fork out £26,495 for this small slice of history.
Rival: Audi A4 2.0 TFSI
THE Audi has a smaller engine than the Saab, but it’s every bit as fast. Build quality is first rate, and the quattro four-wheel drive serves up strong grip. Only the high price counts against it.
Share this on TwitterShare this on FacebookEmail