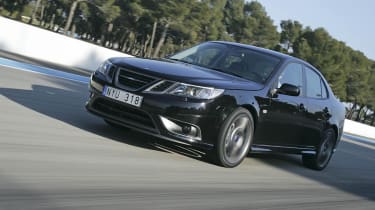 The Turbo X will certainly draw attention to Saab, but it’s a shame the car isn’t particularly fast in a straight line. The XWD system is fantastic, as it squeezes every ounce of grip from the chassis. However, the standard 9-3 V6 Aero is nearly as quick, £4,000 cheaper and exploits XWD just as well. Still, hats off to Saab for attempting to spice up the range. More than 150 orders for the Turbo X have already been placed, although we can’t help thinking these customers are buying with their heart and not their head

Saab's ageing model range is in desperate need of a boost. Last year alone saw UK sales drop by 12 per cent – but could this be the car to kickstart the comeback?

The Swedish firm is convinced it is, not least because there are two roles the 276bhp 9-3 Turbo X has to play. Firstly, this very special variant celebrates 30 years of turbocharged Saabs. But more importantly, it’s also the first model to be fitted with the all-new XWD four-wheel-drive system.

The innovative 4x4 set-up uses intelligent engine and gearbox software that not only splits torque between the front and rear axles, but also between the right and left rear wheels via a limited-slip differential.

And boy does it work! On a test track, the amount of grip on offer seems endless. The sensation under hard cornering is amazing – it feels like the loaded up rear tyre is digging into the tarmac, and propelling you through the bend. This inspires confidence and makes for rapid progress along a twisty B-road.

The Turbo X certainly looks the part, with a subtle bodykit and a smart set of gunmetal alloys. On the downside, black is the only colour which is available. Inside, there’s acres of leather and carbon fibre trim, and fans of the 900 Turbo of the Eighties will appreciate the retro-styled boost gauge on the dash.

The twin tailpipes produce an addictive warble throughout the rev range, but the engine can’t deliver the same drama. With 276bhp it looks powerful on paper, although in reality the car doesn’t quite make the leap from potent family model to performance saloon. Lifeless steering and a vague gear-change don’t help, and the driving experience is never as good as the looks and figures suggest.

We also had the chance to drive a 252bhp V6 Aero with XWD fitted. It felt just as fast, a touch smoother and the four-wheel drive dug in equally hard. Yet when you consider the prices of the Turbo X and Aero – £32,495 and £28,695 respectively – nearly £4,000 for an extra 30bhp and some minor styling tweaks looks poor value.

As a tool for drumming up more interest in the brand – and launching its XWD transmission – the Turbo X can’t be faulted. However, as a stand-alone product, it doesn’t make nearly as much sense. Only 2,000 models will be produced, with 500 examples heading for UK showrooms.

Deliveries start in March for the Turbo X as a saloon or Sportwagon estate, while XWD will be offered on Aero-spec variants from September.