The used Saab 9-3 Convertible is great value, but what should you look for? 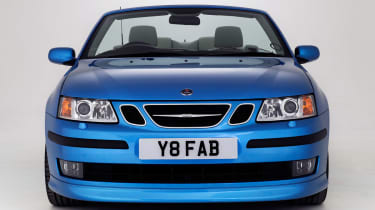 The Saab 9-3 Convertible is getting on a bit, but it’s streets ahead of the previous car, which suffered poor rigidity. The MkII is great value and still cuts a dash, while safety levels are excellent. Aside from the costly 2.8-litre V6, all engines and transmissions are worth a look (autos make up about a third of cars on sale). And don’t worry about the fact that Saab’s no longer in business – parts are readily available, while a raft of specialists, plus helpful online forums, should ensure the 9-3 soft-top is a breeze to own.

Saab is now just a footnote in motoring history, but there was a time when the brand was a force to be reckoned with. It became the first car maker to offer an affordable premium convertible when it launched the drop-top 900 in 1986, and in the next 25 years over 250,000 fabric-roofed Saab 9-3 and 900 Convertibles were sold. Many 9-3s are still around, and with prices from £2,500, they offer affordable open-air motoring for four. But there’s plenty to watch for – and here we spell out what.

Saab introduced the MkII 9-3 Convertible in June 2003, with 1.8 or 2.0-litre petrol engines and a choice of manual or automatic gearboxes. The bigger engine came in 175bhp or 210bhp forms – the latter in flagship Aero guise only.

A facelift in September 2007 freshened the Saab 9-3's styling, and another in February 2011 brought updated looks, lower emissions and more power. But Saab’s end was in sight.

The used Saab 9-3 Convertible’s biggest rival is the BMW 3 Series Convertible. The previous-generation E90 car offers the security of a folding hard-top, plus is fabulous to drive with brilliant engines. It’s well put together, too. Another capable choice is the Audi A4 Cabriolet, with its fine build, svelte looks and practical cabin. If your pockets are deeper, the A5 Cabriolet is even better.

The Mercedes CLK convertible is also a classy four-seat choice, but make sure you go for a MkII, from May 2003. MkI cars aren’t as well made. It’s a similar story for the Volvo V70: the MkII is a fine coupé-cabrio, but the soft-top original is far less impressive.