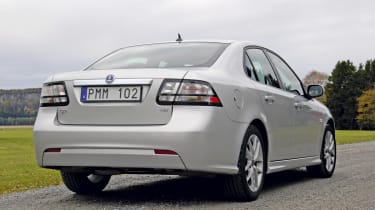 The 9-3 is rapidly approaching retirement, but this trio of engines breathes new life into an ageing model. It is now as quick, quiet and economical as anything in its price range, and despite the Swede’s advancing years it still grips hard in corners and steers sharply. The might of the German executives is strong, but the Saab badge still provides more premium appeal than offerings from Vauxhall and Ford, making this 9-3 an extremely compelling proposition.

The 9-3 is no spring chicken, but resurgent Saab has given its executive saloon a new lease of life, and the result is a cleaner, more appealing car.
Launched in 2002, and built on the same platform as the now defunct Vauxhall Vectra, the 9-3 has always struggled to compete with rivals from the German firms. But now, there’s at least one very good reason to reconsider Saab’s ageing boardroom pretender; super-low CO2 emissions.
Three new 1.9-litre diesel engines have been added to the range, each boasting 62.8mpg and 119g/km in saloon form, despite varying power outputs. The Convertible and Sportwagon estate get

the engines, too, although economy and emissions suffer a bit because of the extra weight. For the saloon, the low CO2 means first year road tax is free. The old 118bhp and 148bhp 1.9-litre diesels are replaced by quicker and cleaner 128bhp and 158bhp twin-turbo versions. But best of all is the 178bhp TTiD4 driven here.
It has a mighty 400Nm of torque available from only 1,850rpm, so it’s powerful and flexible in any of its six gears. In addition, it’s superbly quiet and smooth on the go, feeling every bit as refined as the benchmark 2.0-litre TDI units from Volkswagen.
Saab has achieved the hikes in performance and economy by reducing friction in the engine, adding low-rolling resistance tyres, thinning some of the metal bodywork to reduce weight, and using lighter materials with the same soundproofing qualities.
Unusually, the ride height hasn’t been lowered because the firm wanted to maximise comfort. And, disappointingly, there’s no stop-start engine technology, so you’ll be burning fuel at the traffic lights.
It all adds up to a car that hasn’t the slightest whiff of being an ‘eco’ model, yet delivers fuel economy that keeps up with the best the BMW 3-Series can offer. The front-wheel-drive Saab will never quite match the dynamic prowess of the 3-Series, but it still grips well, turns in sharply and is refined on the motorway. The only gripe is the lumpy gearchange.
Otherwise, this elderly junior executive is surprisingly sprightly. And at £23,000 for a well specced Turbo Edition model, it makes the German competition look pricey.
Rival: Insignia ecoFLEX
With economy of 54.7mpg and 136g/km emissions, Vauxhall’s eco saloon trumps Ford’s most efficient Mondeo, but it can’t match the revised 9-3. However, its modern design and quality cabin make the Saab look dated.
Share this on TwitterShare this on FacebookEmail