Saab has excellent safety and decent handling but is perhaps not as dynamic as its German rivals. 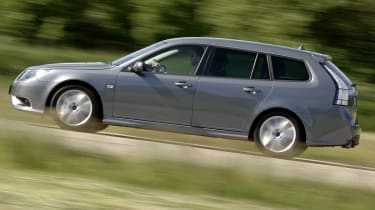 The restyled 9-3 SportWagon is a handsome estate car, and the performance and economy provided by the new twin-turbodiesel powerplant are further welcome plus points. Safety remains a typical Saab strong point, but although the 9-3's handling will satisfy most people, the car doesn't offer the crisp dynamics of some of its German rivals, nor is the build quality of its cabin as good.

Saab is promising its new 9-3 family will have the X-factor when it goes on sale in the UK in September.

All three models in the line-up - the Cabriolet, Sport Saloon and SportWagon - have been given a major facelift, with styling inspired by the Aero X concept, which Auto Express drove in March last year.

But despite major visual changes, which include fresh headlamp units and revised panels from the A-pillars forward, the 9-3 isn't an all-new car. Underneath it uses the same platform as before, which is shared with the current Vauxhall Vectra.

We got behind the wheel of the flagship Aero SportWagon, powered by a new 1.9-litre four-cylinder twin-turbo diesel engine. Top-spec Aero models are distinguishable from the rest of the range by sportier grilles and sharper bumpers front and rear.

The look perfectly complements the new headlamps, which feature a smart, additional lighting strip above the main light unit. The firm has also removed all the door and bumper rubbing strips to give the 9-3 a cleaner overall shape. And there's no doubt it looks handsome in estate form.

Saab's new TTiD engine has been designed to provide instant throttle response throughout the rev range. Two turbochargers, one small, one large, are used. When the driver presses the throttle, the smaller turbo is able to react faster than the bigger unit, so from idle to 1,500rpm, it is used. From there, the second turbocharger is brought into play, while from 3,000rpm on, the larger one works on its own.

In practice, it performs well. With 178bhp and 400Nm of pulling power on offer, engine response is excellent, and the car is capable of sprinting from 0-60mph in 8.3 seconds, which is faster than the equivalent Audi A4 Avant or Jaguar X-Type Estate.

Saab has improved the 9-3's refinement overall, but while the car has very little wind noise at speed, we still noticed a slight engine vibration through the pedals.

With its six-speed manual gearbox, the 1.9 TTiD returns 47.1mpg. That drops to 41.5mpg if you choose the six-speed automatic gearbox instead. However, the smooth auto is easier to live with than the slightly notchy feeling manual transmission. The 9-3's brake pedal is well weighted, while Aero models also benefit from uprated sports brakes.

For those seeking a true sporting experience, Saab's front-wheel-drive chassis does not feel state-of-the-art. The company points out that as the 9-3 has a five-star Euro NCAP crash test rating, there really was no need to change its underpinnings. How-ever, although it is comfortable enough, there's no disputing the fact that rivals such as the BMW 3-Series and Audi A4 offer great handling and better body control.

Saab's German competitors also build better interiors. The Swedish firm freshened up the 9-3's cabin last year, and has introduced new sound-deadening material into the rooflining of this model. But the quality of the plastics used and the standard of fit and finish are simply not up to BMW or Audi standards.

The comfortable and supportive heated front seats are excellent, though, and while rear legroom is not particularly generous, the cargo area is well thought out. As with the saloon, the rear seats split and fold 60:40. The boot is well shaped, and the middle section of the floor can be folded upwards and used to prevent shopping bags from sliding around. So despite its shortcomings in other areas, the 9-3 does make a practical tourer.