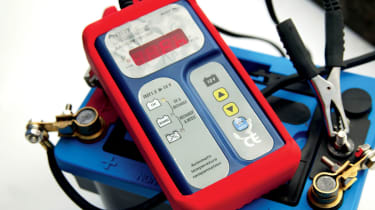 Cars are bursting with hi-tech gadgets, and there’s never been so much strain on a battery. Alarms, immobilisers and other kit take a continual load from the power supply, meaning new units can go flat if the car’s not used for a while.

The most important factor when battery shopping is the physical dimensions – expressed as a three-digit code. Here, we tested the 063 size, one of the most common. Other figures include cranking amps (CA) – the maximum current a battery can give out in one go – and amp hours (AH), the total amount of electricity a battery can hold.

Premium AGM (Absorbent Glass Mat) batteries are expensive but very powerful, and will still start an engine even if they’re considerably discharged. They also withstand low levels of charge for longer periods without degrading.

To gauge each battery’s true power reserve, we wired each one of them up to a high output headlamp bulb, and timed how long it took for the light to go out. After recharging, we then deliberately discharged the batteries by roughly the same amount that alarms – and other electrical systems – do in two to three weeks. We then checked the units would still deliver 200 amps – which starter motors typically require. After charging them up again, our final test involved all 8 of the challengers spending 24 hours at -18°C, to replicate the coldest of winter’s mornings.

Finally, we used the same testing equipment to take 200 amp loads for up to 30 seconds at a time. We noted how many ‘starts’ each battery managed.

The two AGMs perform best, but high prices make them more suited to specialist applications than normal motoring. Exide’s X-Tra Plus takes first place for solid performance at a great price. The Halfords units are second and third.