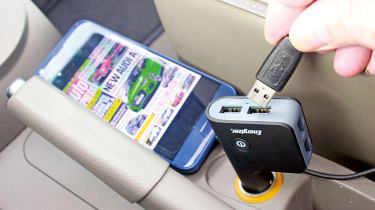 Powering and charging portable devices on the move is a necessity nowadays. Many cars have built-in USB sockets, but these often can’t handle the power demands and many owners need more than one socket anyway. Two sockets are a common minimum but, for anyone with kids in the car, three, four or even five sockets would be better.

Virtually all phones and tablets still use conventional USB outlets, and most adaptors are equipped with suitable sockets. USB-C devices or their adaptors aren’t yet that common which, in turn, means they cost more. However, it is possible to use a conventional USB plug if you buy a simple adaptor (around £4). So which is the one to keep your electronic essentials powered up? We plugged in eight to find out.

We tried all adaptors with various mobile devices, including tablets and phones, a Kindle reader and TomTom sat-nav. Each was connected to a 12V supply, and we plugged in a tablet and Android phone at the same time, noting percentage charge when we started and after 20 minutes.

All devices were discharged to start at 30 per cent. We looked for a good fit and easy removal, a functional design, power-on LED indicator, number of sockets and practicality in use. This was balanced against prices from makers and online.

Once again, the Anker PowerDrive 5 takes victory in our test. We can’t look past its five USB sockets, which deliver a maximum of 10A, as well as its versatile three-foot cable. And it tops it all off by scoring on value for money as well. In second place is another Anker product, the PowerDrive 2 which managed to beat the Energizer, which placed third. 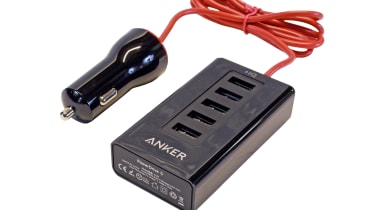 A winner last time out, the PowerDrive 5 is still a great product. Its five sockets in a block were the most we tested. They split a healthy 10A between them – ideal for enthusiastic gamers – and the block is on a three-foot cable so it can be fixed by double-sided tape (provided) between the seats, allowing access for all occupants. There is no power-on LED, but it did record joint-best charge increases of four and 10 per cent. Fine value for a typically high-quality product. 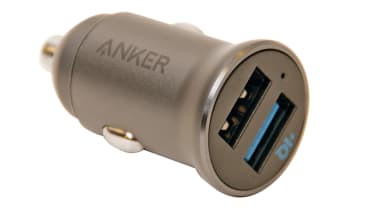 There’s a high-quality feel to this diminutive adaptor from ‘America’s leading charging brand’. The satin gunmetal finish, with subtle branding on the alloy body, is a touch more upmarket over other rivals.

Size often matters with 12V adaptors, because bulky units can foul controls like gearlevers, and cables may get in the way. The PowerDrive 2 is barely 4.5cm long and, crucially, when in a 12V socket, just five millimetres or so sit proud. It has two USB ports with a combined output of 4.8 Amps, so performance isn’t compromised. It was close to the Ring Three-Way on charging: one per cent shy on the iPad and the same amount in front for the iPhone. It’s a great choice if space is tight. 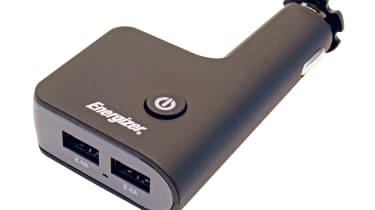 You get a 12V-style socket here, but it’s different to most. Longer, at around 95mm, it divides its four sockets with two on the top and two on the side. We got healthy increases of three and nine per cent on the tablet and phone. As with its stablemate, two sockets are rated at 2.4A each, and two share 2.4A, giving a 6.8A maximum. Twin blue LEDs denote power on and, uniquely, it features an on/off button so the plug can be left when charging isn’t required. Taller and bulkier than most, it might foul the gearlever or handbrake on some cars, but it’s well priced, solid and a good performer. 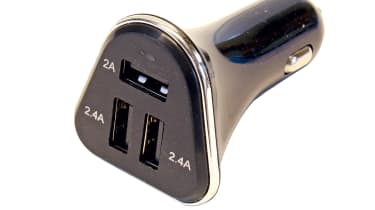 The RMS20 may feature the long-running Type A USB but you get three of them, and that’s key to it remaining our pick. With two rated at 2.4 Amps and a third at 2 Amps, it provides more options in car. The Ring 3-Way managed to add 11 per cent to our discharged phone in the charging test.

While it was a decent margin, most users will find the RMS20 more than enough to top up a phone battery while it is being used. And, crucially, for more than one device. It remains our choice, but the Ring is showing its age with the chrome trim and a blue power light that is remarkably bright in a dark cabin. Perhaps the ideal solution is an adaptor that combines USB-C and Type A sockets until all devices use the former. 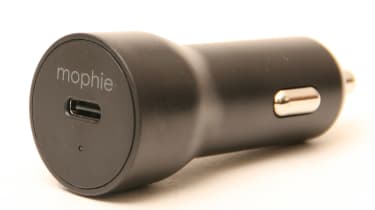 While the take-up of USB-C is still small but growing, many people don’t have a device that has the standard. But with a suitable cable they can use it. While all USB-C sockets look the same, not all do the same job. There’s none of that confusion in car, where we just need charging.

The Mophie adaptor has a high-quality feel and is a few millimetres shorter than its rival. We preferred the small power light, which was much less intrusive at night than the Ring’s. Like Apple’s Lightning connector, USB-C is flippable so goes in both ways; handy where visibility low on the centre console may be limited. It added 15 per cent to our test iPhone, almost half as much again as the Ring, which will see a phone more easily revived when it’s also being used for nav, streaming and the like. 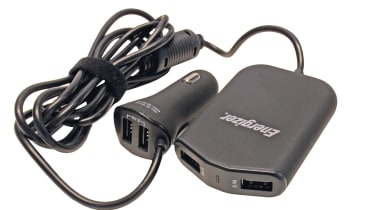 This Energizer is a hybrid; there’s a plug with two sockets connected to a separate unit housing two further sockets. Uniquely, the 50528 is fitted with an integral spring clip to secure it in place. This is particularly handy if it’s to be used in the rear of the vehicle – a real possibility with a 1.5-metre cable. The plug is rated at 2.4A between the two, while the wired unit is another pair of 2.4A sockets. Charging the tablet and phone to three and 10 per cent meant it was the second-best on test. It’s more expensive than its stablemate, but it might be for you if rear-seat flexibility is required. 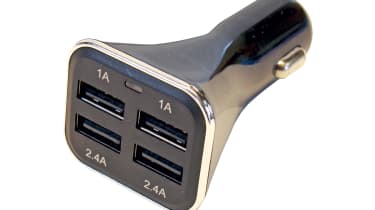 As simple as it gets – just a 65mm-long plug with four sockets sharing 6.8A in the end, with a single blue LED above. It felt solid and was easy to remove despite a shiny finish. As with all units here, it has built-in protection against short circuits, overheating, overloading and excess current. Performance trailed the rest, at four and six per cent for tablet and phone, although it’s better value than the Ring. 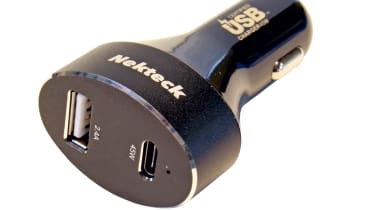 One of the cheaper USB-C adaptors, the Nekteck still has big charging claims (USB-IF Certified). It’s well made, with an aluminium top that made it easy to hold and remove, but the small blue LED could only just be seen in the dark and, during the day, was invisible. On test it gave four and eight per cent on the iPad and phone. It has a one-metre USB-C cable, and is good value if you need the ‘C’. 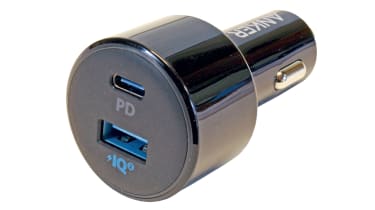 The second of our USB-C adaptors, the Anker is as well made as we’ve come to expect. It features a stylish circular blue power-on LED, and on test it scored well with its practical tip design. Unusually, the standard LED socket is the quicker USB 3.0 (blue) type, with the USB-C sitting above it. We used the latter with an iPad adaptor, and the combined results were the same as the Nekteck’s. It has an 18-month warranty, but is unfortunately nearly twice the price of the Nekteck. 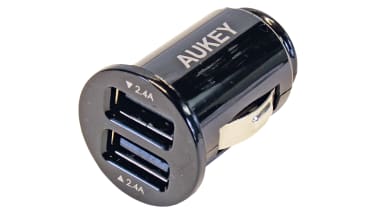 At 33mm, the Aukey is at least half the length of most regular adaptors. Its design lets the ports sit flush with the edge of the power outlet and, in most cases, any cigar lighter adaptor cover will fit over it. On test it gave decent increases of four and eight per cent for tablet and phone, although it was a faff to remove and has no power-on LED. The twin USBs were rated at 2.4A, and the price was the second-best per socket – but this neat unit lost marks because it got very hot in our test.